EBGames has updated their listing of the supposed “Final Bout” re-release with some actual information (including new cover art, seen below) — it seems like this game really is seeing the light of day again!

Vintage Dragon Ball Action! First released in limited quantities in 1997, Dragon Ball GT: Final Bout, is back to honor the enormous popularity of the Dragon Ball animated series. Faithfully reproduced in its entirety, this much sought-after title offers a one-two punch of DBGT and DBZ characters, as well as a powerful variety of ruthless fighting modes. Brilliantly packaged with exclusive cover art from Toei Animation, Final Bout is the perfect addition to every fan’s collection. 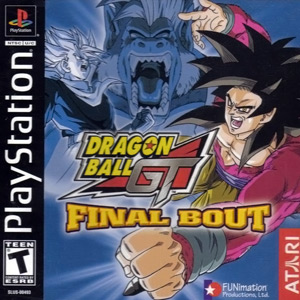 It seems rather odd that no official sites (such as FUNimation and/or Z-Store) have anything to say about this, especially considering it supposedly comes out in a week!