The “Dragon Ball Online” MMORPG that we mentioned in a previous podcast episode indeed appears to be reality! While it is being developed in Korea, it is an officially-licensed game and will be coming to both Korea and Japan on the PC (no console port is mentioned). 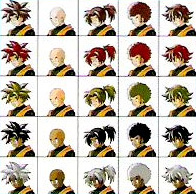 Here are a couple items we have pulled out of the pages:

So there you have it. Check out the “V-Jump” pages in the forum thread for additional screen shots and conversation!