Episode #0120 of the podcast is available for download! Everything’s back together on the server, and we’re right back on schedule. This week, we’re digging ourselves an absolutely ridiculous hole by talking about DragonBall AF. While we do give a little background on where the “rumor” (can you even call it simply a “rumor” anymore, though?) came from, what we’re really discussing is a web-comic/doujinshi by a Japanese fan named Toyble. 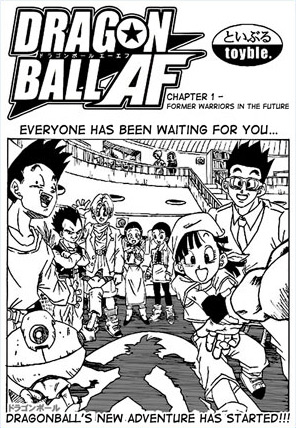 This project takes elements from all the different rumors over the years (like the name “Xicor”, for example) and creates an all-new storyline that takes place some time after the events of DragonBall GT. We brought on Desire Campbell to discuss the project with us, since he’s (as I would describe him) the ring-leader of an English fan-translation that’s been going on! That’s right, you can read along with the story right in the comfort of your computer chair. Definitely check it out.

SHOW DESCRIPTION:
Episode #0120! VegettoEX, Meri, and Julian bring on Desire Campbell to discuss the recent “DragonBall AF” web-comic/doujinshi. No, this doesn’t mean that “DragonBall AF” is a real series that’s somehow been covered up by an amazing conspiracy; rather, a Japanese fan has put together a new series taking elements of the rumors over the years, which is now being translated into English for your enjoyment. DBZ ABCs, some releases, and a batch of amazing e-mails round out the episode.