Just posted by our buddy kei17 over in Japan is some information regarding new cover art that the tankōbon are going to be receiving. While the basic images will remain the same, the surrounding details are being freshened-up quite a bit: 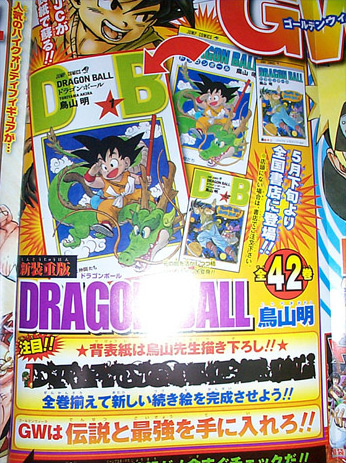 Yes, although the kanzenban run has been the de facto version of the manga that Shueisha has been promoting and referencing (such as in new guide books) since their release a few years ago, the original 42-volume tankōbon run has been very much alive alongside its higher-quality cousin. It is certainly interesting to see it get an update at this point in time, especially considering that even games like Super Dragon Ball Z paid extreme homage to its iconic style.

It will be interesting to see whether or not this new tankōbon run will take any elements from the kanzenban (such as minor censoring details, the “Welcome” fix, or the new ending), though we tend to think it unlikely. kei17 does mention that the spine art will be “changed” (such as not including two Yajirobe), and it will see its release at the beginning of May.