Not only does the November issue of V-Jump include an exclusive “Galaxy Mission 4” Dragon Ball Heroes card for “Janenba Baby”, but it also features a new “Dragon Ball Heroes Victory Mission” mini-manga based on this original character’s recent appearance in the arcade game. This short two-page manga, entitled “The Fiendish Janenba Baby”, revolves around the series’ main hero Beet, who rushes to his local arcade to play the latest mission of Dragon Ball Heroes. Beet is sent into the game itself by Sora, a Capsule Corp. battle navigator, where he is joined by various Dragon Ball GT era heroes, including Gogeta, Gohan, Goten, and Trunks, to face off against Janenba Baby.

As an interesting surprise, the first page credits a new artist to the franchise, Toyotarō (とよたろう), as the person behind this new manga and not Naho Ooishi, who we’ve all become accustomed to lately:

There are currently numerous rumors flying around the internet concerning Toyotarō’s true identity, but so far they are all mere speculation as nothing has been officially confirmed. You can grab a copy of the magazine and this bonus mini-manga story for yourself over on CDJapan for $6.41, Play-Asia for $13.49, or Amazon Japan for ￥530 (~$6.80), while supplies last. The last page does note that the manga story will be continued, and although it doesn’t say exactly when, we assume it will appear in next month’s issue that’s set to be released on 20 October 2012. 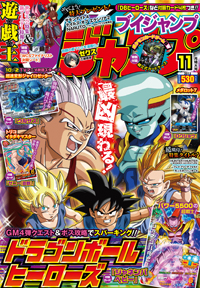 Big thanks to forum member Raykugen for the heads up!

UPDATE: The November 2012 issue of V-Jump is now available on both CDJapan as well as Play-Asia.