Leaked pages (via Manga-News Japon and 2ch) from the upcoming Weekly Shōnen Jump 2013 issue #1 (due out this Monday) have finally confirmed the two characters previously seen on a questionable poster for the upcoming 2013 theatrical Dragon Ball Z movie, “Battle of Gods”: 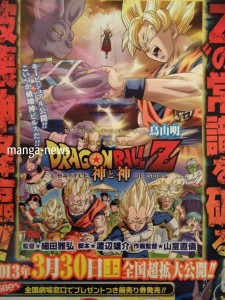 “Z”の常識を破る破壊神、降臨!!
A God of Destruction who Violates the Common Sense of “Z” Descends!!

This (perhaps final?) version of the poster has a few small discrepancies from the initial version that leaked, such as Yamcha’s position in the background. This suggests that whoever leaked the original image was either working on it him/herself or otherwise had access to the work-in-progress version.

An additional image, which appears to be further down the same page of the magazine, reveals the names for both characters, along with their respective voice actors: 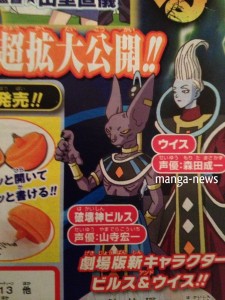 まるで猫の様な姿をした破壊神ビルス！！そして、ビルスの傍らに立つ人物ウイスとは一体…！？
It’s as if the God of Destruction, “Birusu”, has a cat-like appearance!! And, who the heck is this “Uisu” person standing next to “Birusu”…?!

[ For additional line of text, see updated information below ]

The term 破壊神 (hakaishin, meaning “God of Destruction”) appears to be an actual title of some sort for “Birusu”, as it is included in the box next to him that contains his name.

Dragon Ball Z: Battle of Gods is the first full-length animated theatrical feature for the franchise since 1996’s 10th anniversary movie, Saikyō e no Michi (“The Path to Ultimate Strength”). It is due in Japanese theaters on 30 March 2013, with no official word just yet on an international release, though there are hints at one on a production level.

Update 1: After viewing the promotional page in its entirety, we have noticed an additional line of text that had been clipped off of the original leaked scans. This line of text appeared just below the new character introductions, and for the sake of completeness, we have included this text line below.

まるで猫の様な姿をした破壊神ビルス！！そして、ビルスの傍らに立つ人物ウイスとは一体…！？
It’s as if the God of Destruction, “Birusu”, has a cat-like appearance!! And, who the heck is this “Uisu” person standing next to “Birusu”…?!

Update 2: Scripwriter Yūsuke Watanabe responded to our inquiry regarding the possible source for the two characters’ name puns being alcohol based (“pilsner” and “whiskey” as the theories), stating:

We will continue to push for clarification and confirmation!

7 Comments
Connect With Us
Support Us
Your support for Kanzenshuu is what keeps us going. You can help by donating to us directly, or by shopping online at certain retailers through our affiliate links below. Every bit counts and helps contribute to our server fees and bringing you new site content, reviews, and contest items.