Yesterday we reported about some very early rumblings of a new fully-colored manga re-release and something being called a “Chōzenshū” (超全集). Fortunately, our very own Julian rushed out to grab the February 2013 issue of V-Jump and snapped a quick photo of the page containing the essential details we had been missing! 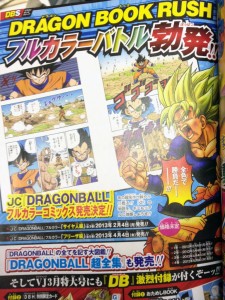 The page also specifies that the “Chōzenshū” will be a four volume set of illustrated reference books that “tell everything about Dragon Ball“. The four volumes are listed to come out next year on February 4th, March 4th, April 4th, and May 9th, respectively.

At the moment these releases have not popped up for pre-order on any online retailers, but we will of course be sure to let you know as soon as they do, along with any additional details we can find!

9 Comments
Connect With Us
Support Us
Your support for Kanzenshuu is what keeps us going. You can help by donating to us directly, or by shopping online at certain retailers through our affiliate links below. Every bit counts and helps contribute to our server fees and bringing you new site content, reviews, and contest items.