As advertised in the previous issue of V-Jump — and confirmed via an ongoing 2ch thread as well as by our own Julian in Japan! — the March 2013 issue contains loads of new information about the franchise’s upcoming Dragon Ball Z: Battle of Gods theatrical film, and the various new publications available next month. The issue has just hit store shelves across Japan, but it is also currently available from online retailers such as CDJapan, Play-Asia, and Amazon Japan. 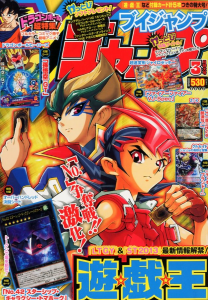 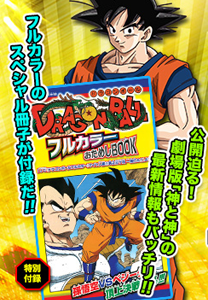 While the original announcement for the “Full Color Comics” noted that only the Saiyan and Freeza arcs were scheduled for this fully-colored re-release of the manga, it has now been announced that Shueisha plans to cover the entire “Z”-era of the original manga storyline. The tentative plan is to begin with the Saiyan arc and work toward the Majin Boo arc, and then possibly return to the very beginning of the Dragon Ball story, akin to what was done with the order of Dragon Box releases in the early-2000s — most interestingly is that they appear to want to move ahead with a digital-only release of these earlier chapters, at least to begin with. As a special bonus, the issue comes packaged with an exclusive “Full Color Trial Book” which contains the entirety of chapter 228 (referred to as “Saiyan Arc chapter 34”), “One-on-One Combat!!”, in full color (minus its original title page). The price of the “Freeza Arc” volumes is still to be determined. 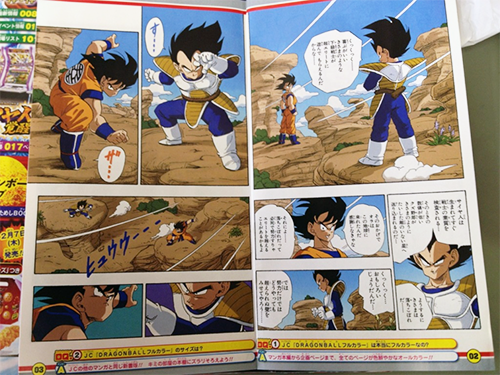 Along the bottom of the Trial Book’s pages, there is a Q&A about the new releases:

Will “Dragon Ball Full Color” really be in full color?
From the manga itself to project pages, all of the pages will be in vibrant color!!

What is the size of “Dragon Ball Full Color”?
“New Book” format, the same as the other Jump Comics manga!! You can line them up smoothly on the bookshelf in your room!!

Will there be pages other than the manga itself in “Dragon Ball Full Color”?
It will include “Enter the DRAGONBALL”, which will explain the story up to the “Saiyan Arc”!!

Will we learn the latest “Dragon Ball” information in “Dragon Ball Full Color”?
It will include a special interview with Akira Toriyama-sensei!! A variety of mysteries will become clear?!

Will there be any special bonuses with “Dragon Ball Full Color”?
There will be a special postcard using a title page illustration from the comics included!!

When will I be able to read color comics from before the “Saiyan Arc”?
We’re moving along with a release plan!! Before that, we intend to distribute it digitally on the web!!

The issue also notes that the four volume set of new “Chōzenshū” guidebooks will be condensed versions of the “legendary Daizenshuu“ volumes released in the mid-1990s. The Chōzenshū will however have updated information that has come to light in the years since their original publication, and each volume is set to contain a B4-sized poster with a “rare” illustration by Akira Toriyama — the first one appears to include the poster from Daizenshuu volume two, “Story Guide”.

What will be the contents of the “Dragon Ball Chōzenshū”?
It will be four volumes in all, condensing the legendary “Dragon Ball Daizenshuu”, which had gone out of print!!

Will there be new information in the “Dragon Ball Chōzenshū”?
In addition to the information that was in the “Daizenshuu”, it will be packed with the latest information!!

Will there be any special bonuses with the “Dragon Ball Chōzenshū”?
It will come with a B4-size pull-out poster using a rare illustration by Akira Toriyama-sensei!!

A potential cover for the first volume is also showcased (with the same cover illustration as Daizenshuu volume four, “World Guide”), though it is noted that things are subject to change: 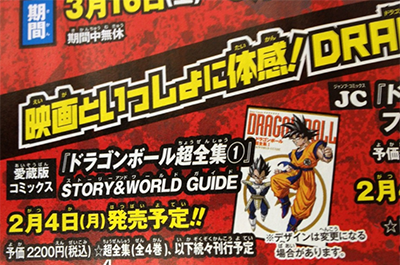 The line of books the Chōzenshū are a part of — Aizōban Comics or “Collectors-Edition Comics” — is the same as the new listing for the books, though V-Jump still lists the original 04 February 2013 release date, which seems to have been pushed back one day to 05 February 2013.

Everything here begins their respective releases the first week of February — stay tuned to Kanzenshuu for the best, most-comprehensive coverage around!

4 Comments
Connect With Us
Support Us
Your support for Kanzenshuu is what keeps us going. You can help by donating to us directly, or by shopping online at certain retailers through our affiliate links below. Every bit counts and helps contribute to our server fees and bringing you new site content, reviews, and contest items.