The official “Battle of Gods” website has announced a new collaboration with Albirex Niigata, a Japanese J-League Division 1 football (soccer) team. A new poster has been unveiled, and will be on display across Niigata Prefecture, in promotion of their upcoming match on 03 March 2013 with the defending J-League Division 1 champions, Sanfrecce Hiroshima. The poster is based on the official Dragon Ball Z: Battle of Gods poster, with the movie characters replaced by the football team’s players, a new title similar to those created with the movie’s official “Moji Maker Z”, and a similar slogan: “Starting with the Strongest”. The figure in the background replacing “Uisu” is the team’s manager Masa’aki Yanagishita, “Birusu” appears to have been replaced by the Sanfrecce Hiroshima goalkeeper Shūsaku Nishikawa, and Son Goku has been replaced by the team’s forward Bruno Lopes. 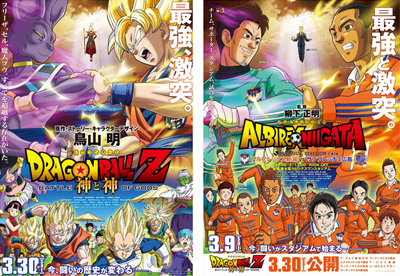 In addition, all supporters at the match will be emblazoned in orange to promote the team and Son Goku, who will make an appearance at the stadium, and the Dragon Ball Z theme song will be used to rouse even more support. A team spokesman, along with the team’s forwards Bruno Lopes and Tatsuya Tanaka, released comments about the recently announced collaboration and their adoration for the Dragon Ball series. Bruno Lopes, who is originally from Brazil and a noted “big fan” of the series, said that the series is still very popular in his homeland, so he is really happy and touched to be involved with it in Japan.