While much of the trailer audio is buried under FLOW’s rendition of “CHA-LA HEAD-CHA-LA” and the TV host’s narration, two lines from Birusu, God of Destruction, and Goku can be heard:

In addition to many of the previous story bits we have seen in the prior trailer and had revealed over the last few weeks, this new preview gives us a glimpse of Goku in a sweet track suit up at Kaiō’s, Piccolo apparently singing karaoke, Gohan as Great Saiyaman, Majin Boo attacking Birusu, Goku in action as Super Saiyan 3 against Birusu, and a glimpse of an Ōzaru, as well as a tease of the new “Super Saiyan God” form. 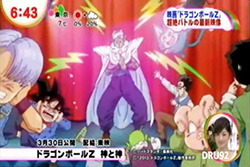 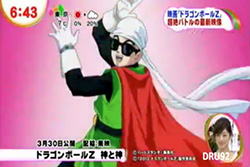 This is the typical cycle for these types of new previews; before the clean, final version makes its way to official outlets, Fuji TV gets a sneak-peek airing on morning news- and entertainment-digest shows such as Mezamashi TV with some additional narration on top.