Today’s (04 March 2013) issue of Saikyō Jump features — breaking from the regular pattern of chronological Dragon Ball story retellings — an “SD” version of Dragon Ball Z: Battle of Gods to promote the film’s theatrical debut coming up soon on 30 March 2013. The 12-page “Dragon Ball Z: Battle of Gods Special Manga Version” is drawn by series regular Naho Ooishi based on the original work by, and with the supervision of, Akira Toriyama. 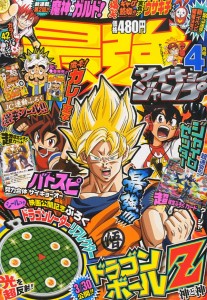 NOTE: The chapter appears to tell the story from the early part of the upcoming movie, weaving together bits and pieces we have seen from the various trailers and promotional materials. Those wishing to avoid more detailed “spoilers” may wish to stop reading, though it is likely that events in the “SD” version will differ at least slightly from the theatrical version.

The story begins on Kaiō-sama’s planet with him, Goku, and Bubbles. Kaiō becomes extremely agitated when he senses Birusu’s awakening. Goku asks him what’s up, and Kaiō describes him using the narration from the first trailer for the movie. Kaiō stammers out Birusu’s name as he realizes the God of Destruction is standing right behind him (not the “lanky pale-blue guy” that Goku thought, who is actually Birusu’s attendant), and proceeds to go into obsequious-mode as Birusu says it has been a while since they last met. Birusu is here, however, because he has business with the Saiyan.

The God of Destruction tells Goku of the prophetic dream about “Super Saiyan God”, but Goku says he has only heard of plain old Super Saiyan. Kaiō has not heard of it, either. Birusu decides to leave (at Uisu’s suggestion) to inquire with the Saiyan Prince on a planet called “Earth”, but before he leaves, he accedes to Goku’s request to fight with him, since Goku heard he’s super-duper strong. The God tells Goku to come at him with his full power. Goku revs up to Super Saiyan 3. Uisu is mildly impressed, and Birusu instructs Goku to come at him — Goku is surprised they are not taken aback. Goku comes flying in with a punch, and there is a large explosion… but when the smoke clears, the God is effortlessly holding Goku’s fist in his hand. Birusu flicks Goku in the forehead, sending him tumbling around Kaiō’s planet. 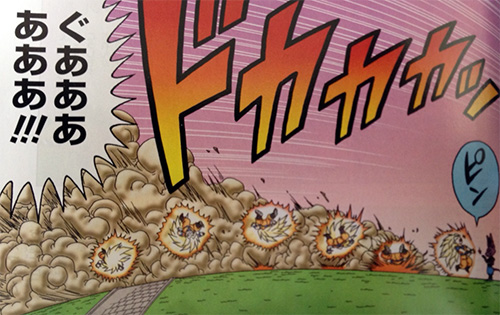 Birusu goes off to Earth to visit Vegeta, while Goku is down for the count, and Kaiō stands there with Bubbles, mouth agape, though he snaps out of it when he realizes he needs to warn Vegeta.

Back on Earth, everyone is gathered at Capsule Corporation for Bulma’s birthday party. Kuririn asks how old she is, but she retorts with a “Shut up!” while Vegeta mutters that it is the “same lousy thing” every single year. She eventually answers, “in SD, I’m always a youthful 16!!!” — Kuririn protests that, if that were the case, he would only be 13! Kaiō telepathically contacts Vegeta to explain the situation, and notes that whatever he does, he must not anger Birusu, lest he destroy not only the Earth, but the entire galaxy.

Vegeta is suitably freaked out, not least because of all the happy people enjoying themselves around him. As Kuririn plays with his daughter, Piccolo sings karaoke (much to the dismay of Goten and Trunks), and everyone toasts to Bulma’s good health, Vegeta looks over (eyes bugging out) to notice Birusu lounging on a deck chair across the way. Kaiō was not exaggerating: Birusu is indeed a big deal. The chapter closes on Birusu asking Vegeta about Super Saiyan God, and Vegeta repeating the words back at him. The ending narration says you will have to see the rest with your own eyes at the movie theater!

The April 2013 issue of Saikyō Jump, on Japanese shelves today, is also available online from sites such as CDJapan and Amazon Japan. The issue also comes packed with a bonus “Dragon Radar Reflector”.