KFC has been massively promoting the new film, Dragon Ball Z: Battle of Gods, with toys, posters, bottles, you name it. The kid’s-meal (“Smile Set”) toys in particular have gone through two iterations already. But now, the third phase of items has been announced. Starting on 28 March 2013, the “I’m Excited! New School Term Support Goods” will be released to KFC locations across Japan. If you order a “Smile Set”, you will have your choice of one of the following items, designed with the new school year (which begins in April) in mind: 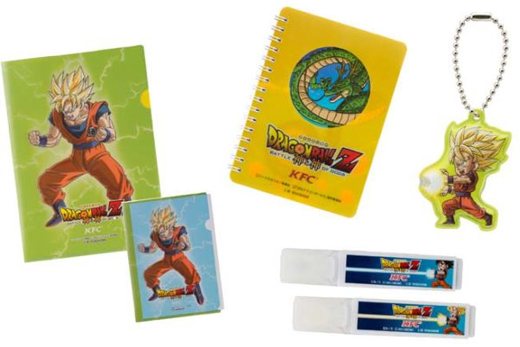 Each “Smile Set”, which comes with either one piece of standard Fried Chicken, or one piece of Colonel’s Crispy Chicken and a biscuit, along with a small French Fries, is available for 500 yen.

Additionally, seven Colonel Sanders statues that adorn the front of KFC restaurants throughout Japan — Sapporo, Sendai, Tokyo, Nagoya, Osaka, Fukuoka, and Naha — had been dressed in Goku’s clothes and holding one of the seven Dragon Balls since the middle of last month, but recently, those Dragon Balls went missing. They then turned up in the Ikebukuro district of Tokyo for a special Dragon Ball Z movie tie-in event, for one day only, on 03 March 2013 from 10 am to 5 pm, as described via the official KFC Japan Twitter account:

Right now at the KFC Ikebukuro Sunshine Street location, we are holding a Dragon Ball Z movie opening event! The seven Dragon Balls, which were scattered across the country, have been gathered together! Buy an applicable menu item, and get Dragon Ball memorabilia☆★ 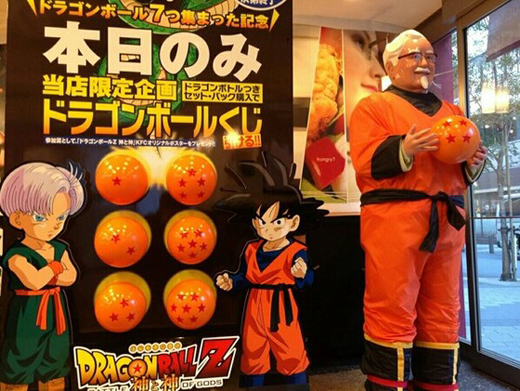 Thanks to DragonBoxZTheMovies for the tip on both of these!