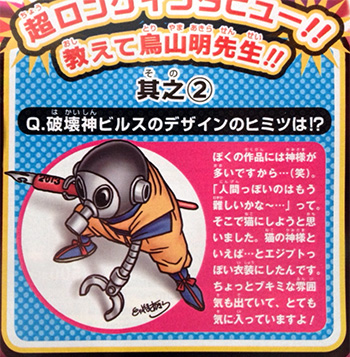 What is the secret of the design for Birusu, God of Destruction?
Because there are so many gods in my work… (laughs), I figured, ‘something humanoid might be difficult, now,’ so I thought I’d make him a cat. Thinking, ‘Speaking of feline gods…’ I went with an Egypt-esque costume. It gives off a bit of an ominous air, as well, so I’m really pleased with it!

Toriyama had expanded upon this answer back in his Chōzenshū 1 Q&A session (“We Asked Akira Toriyama! 2013“), explaining how Birusu is modeled after the 14-year-old Cornish Rex that he currently owns.

We will continue to archive each of Toriyama’s answers on a new page of our “Translations” section with each release.