Anime streaming service Daisuki has announced that they will be streaming the Dragon Ball Z TV series on their site to viewers in the United States and Canada. 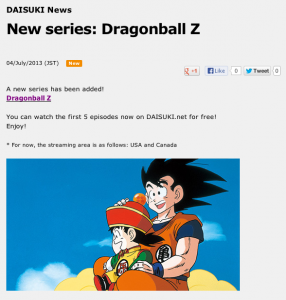 Unlike FUNimation’s streaming arrangements with Hulu which feature the cropped/widescreen version from the company’s “season” orange bricks released from 2007-2009, Daisuki’s stream — currently of the first five Dragon Ball Z episodes — is exclusively in Japanese with English subtitles and in the series’ original 4:3 aspect ratio. The original Japanese-language title cards are also included, as well as the correct (first) animation for the opening theme, “CHA-LA HEAD-CHA-LA”.

Big thanks to forumite NessMudkip for the heads-up!