In our most recent episode of the Kanzenshuu podcast, a possible tie-in was discussed between Akira Toriyama’s new series Jaco the Galactic Patrolman and the classic Dragon Ball manga. While there were apparent hints being dropped throughout the first chapter, which was recently published in this year’s 33rd issue of Weekly Shōnen Jump, we were left with nothing more than “fan theories” as to what, or even if this could tie in with Dragon Ball. Akira Toriyama went so far as to even mention in his author’s comment that some of the nostalgia would become clear as the story progressed:

ちょっと古臭い感じの内容ですが最後まで読んでいただければなぜかわかりますよ<明>
The content seems a bit dated, but if you read to the end, you’ll understand why. (Akira)

While Toriyama merely hints at such connections and tie-ins, Shueisha has yanked the veil off the mystery and confirms what we suspected — Jaco the Galactic Patrolman is indeed tied to the legendary Dragon Ball franchise. A few key promotional lines on the digital and print announcement pages for issue 33 on Weekly Shōnen Jump’s official website lay it out pretty clearly.

The whole world’s long-awaited return of a “legend” is here!!

And to leave no lingering skepticism as to what they mean, they simply spell it out for us. 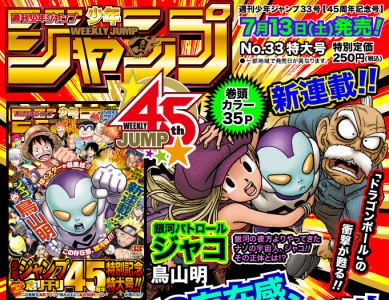 The shocking revival of “Dragon Ball”!!

There are also a few Japanese sites whose listings for this issue of Weekly Shōnen Jump contain what appears to be an official description of the series from Shueisha:

Akira Toriyama-sensei’s First New Series in 13 Years is “Jaco the Galactic Patrolman”
The shocking revival of “Dragon Ball”! In celebration of the 45th anniversary, the superstar returns!
Jaco, a mysterious space alien comes from a far-off galaxy!! What’s his true identity?!

So if you’ve been holding off on reading the first chapter, which is currently available for free via Viz’s latest starter pack, now is your chance to start from the very beginning and follow along. Once you’re all caught up, join our on-going forum discussion and let us know how you think this all ties into the Dragon Ball universe. What are your theories, impressions, or general thoughts on the new series? Let us know!