Late last month at the “Saikyō V-Jump Festa” event that was held in Tokyo and Osaka, our Japanese buddy and long-time fan/collector “Peking Duck” tweeted out an image of what appeared to be an adult-age Gotenks being teased as a coming addition to Dragon Ball Heroes. While a new absorption for Super 17 has been revealed since then, mum was the word about this potential Gotenks update.

Via a Yahoo! Japan Auctions listing regarding the then-upcoming 2013 #10 issue of V-Jump, we first caught a new advertisement for “Galaxy Mission 10” and its associated cards that appeared to confirm this GT-style Gotenks was indeed on the way: 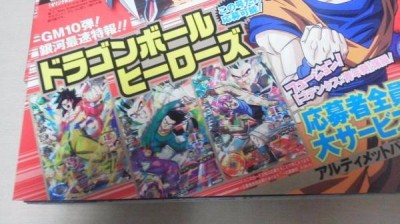 V-Jump is officially out on store shelves today, however, which means we can provide the full breakdown! 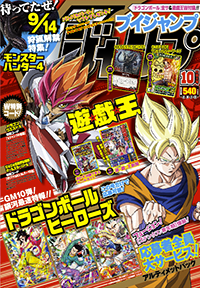 The October issue is offering a promotion where all readers who send in the included entry form and a ¥300 postal money-order will receive a special “Adult Gotenks Ultimate Pack”, consisting of three cards compatible with an upcoming “new chapter” of Dragon Ball Heroes that will launch in November. The three cards are “Son Goku: GT” with “Card Action Ability: Change” allowing him to become Super Saiyan 4, and “Son Goten: GT” and “Trunks: GT”, whose “Card Action Ability: Fusion” allows the two of them to fuse into an adult version of Gotenks. The catch-copy included with the promotion states that he is the “super fused warrior who holds the key to the New Chapter”, but it is not yet clear what this “new chapter” is; Galaxy Mission 10 will debut in September, but nothing has been announced yet for after that. Along with these three cards, the pack will also include an “Ultimate Victory Book” booklet containing a special Dragon Ball Heroes: Victory Mission comic that will explain how adult Gotenks came to be.

Thanks again to our buddy TheDevilsCorpse for the ever-watchful Heroes eye!