The continuation of Dragon Ball Kai into the Majin Boo story arc is perhaps the biggest, most widely-known, open secret there has ever been for the franchise. Kanzenshuu can independently confirm that it is real and it is in production… and that is about all we can say for sure.

The “refreshed” version of the Dragon Ball Z TV series originally began in Japan in 2009 as part of the 20th anniversary celebration of the anime. Kai ran alongside One Piece to form the “Dream 9” super-block of content on Fuji TV. It ran for a total of 97 episodes — up through the end of the Cell story arc — before the massive Tōhoku earthquake and tsunami disaster occurred, preempting “Episode 98” from actually airing before Toriko ultimately took its timeslot in April.

After the series’ “completion” with the Cell arc, things remained quiet as it was distributed to the rest of the world for various television broadcasts and home video releases. New dubs were created and each company seemed to bank on Toei’s strategy of simultaneously re-engaging prior fans and setting up an entirely new fanbase.

In November 2012, Mayumi Tanaka (Kuririn/Yajirobe) let it slip on her personal blog that the Japanese cast was starting up recording again for Dragon Ball Kai. Surprisingly, it would not actually air on television in Japan, but rather it would be produced for international release:

It won’t be aired in Japan, but overseas, Dragon Ball Kai is continuing.
Right now, we are recording the part at the Tenka’ichi Budōkai, where Goten and Trunks infiltrate the adults’ division by one standing on the other’s shoulders.
The image is definitely clearer than before.
We talked about how we want it to air in Japan, too.
— Mayumi

Almost a full year later with no real information, Tanaka slipped even more information on her personal blog in the form of a birthday celebration photo… which also happened to indicate more Dragon Ball recording. Notably shown in the photo were Unshō Ishizuka (who took over the role of Mr. Satan after Daisuke Gōri’s unfortunate passing), Kōzō Shioya (the voice of Majin Boo), Yūji Mitsuya (voice of Kaiōshin) and Yukio Nagasaki (sound director from Dragon Ball Kai). 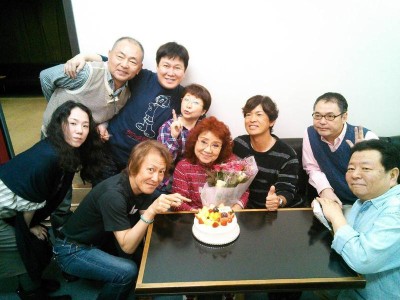 Toshio Furukawa (Piccolo) even got in on the action by teasing voice recordings on his own personal blog, notably showing himself alongside Yūji Mitsuya, as well. 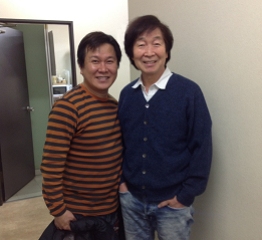 Various members of various voice casts on each side of the Pacific have since made comments about the continuation of Dragon Ball Kai. Some are left to hang out in the vastness of the Internet, which other comments seem to mysteriously vanish as quickly as they first slipped out. Even Madman Entertainment down in Australia seems to be looking forward to its continuation, and went so far as to pin it down for a late-2014 release.

So where does Toriko fit into this?

Toei launched the Toriko TV series — an anime adaptation of the original manga by Mitsutoshi Shimabukuro — with a clear intent to push it as “the next big thing” to its target demographic. Financial presentations from the company (generally in the form of quarterly fiscal reports) make this obvious, along with the timeslot it was given. While series like One Piece make an extraordinary amount of money, there is always the potential for it and other series to end or otherwise fall out of grace with its fans. As a business, it makes sense to continuously be generating new content and fostering new batches of consumers.

Fans of Toriko have recently noted how its pacing has significantly picked up over the last several weeks (to about two-to-three chapters per episode). While this alone in a vacuum does not inherently mean anything, there was one larger piece of damning evidence: the cancelation of the franchise’s Carddass series.

On the flipside, one of Toei’s most recent investor reports makes a note about:

A common theory being tossed around right now is that Toriko will either be canceled or put on hiatus, with Dragon Ball Kai reclaiming its timeslot in the “Dream 9” block once again this coming April or May. Dragon Ball Kai generally did “OK” in the ratings, but all the meanwhile, the franchise’s merchandise sales continued to tank from 2007 onward. Kai being on TV seemed to, if anything, negatively affect merchandise sales. So why is it worth noting ratings?

In a nutshell, Toriko (the new series) at its highest point was still only just meeting the average household ratings of Dragon Ball Kai (a new version of an old series). Fans may have only been tuning in to Kai to watch the big scenes, but it was still more than Toriko has been regularly receiving as a whole.

Licensing sales tell a story of their own, but these types of children’s franchises are also supported quite heavily by their merchandise sales. Dragon Ball merchandise sales have fluctuated over the last few years, both leveling out after the cancelation of Dragon Ball Kai and then having the occasional spikes and drops. Dragon Ball Heroes continues to be a — perhaps surprising — success for all companies involved (Namco-Bandai, Toei, and Shueisha alike), so there is definitely room for the franchise to support itself across various forms of media.

Again, right now the only solid confirmation that we can provide is that, yes, the continuation of Dragon Ball Kai into the Majin Boo story arc is real. We have no idea when or how it is coming to any country in particular, but it exists.

(… which is at least more than anyone can say for the other hilarious bit of Dragon Ball vaporware: the mythical Ocean dub of Kai…!)