With the launch of the April 2014 issue of V-Jump providing the first official confirmation of Dragon Ball Kai‘s continuation into the Majin Boo story arc, the official Japanese website has also been updated! As of right now it is simply a splash page, with the previous iteration still available. 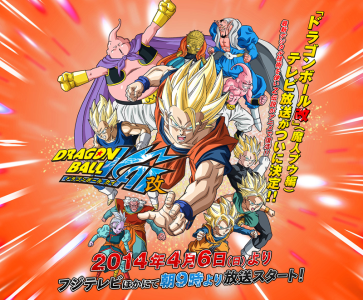 Dragon Ball Kai, the “refreshed” version of the Dragon Ball Z TV series originally created for its 20th anniversary in 2009, officially kicks off into a new era 06 April 2014 in Japan on Fuji TV at 9:00 a.m. It will be reclaiming its spot in the “Dream 9” block — taking it back from Toriko — alongside One Piece.

10 Comments
Connect With Us
Support Us
Your support for Kanzenshuu is what keeps us going. You can help by donating to us directly, or by shopping online at certain retailers through our affiliate links below. Every bit counts and helps contribute to our server fees and bringing you new site content, reviews, and contest items.