The July 2014 issue of Saikyō Jump officially hits Japanese store shelves tomorrow (04 June 2014), but we were able to secure a copy a day early and take a look at the overwhelming amount of Dragon Ball content it has for readers! 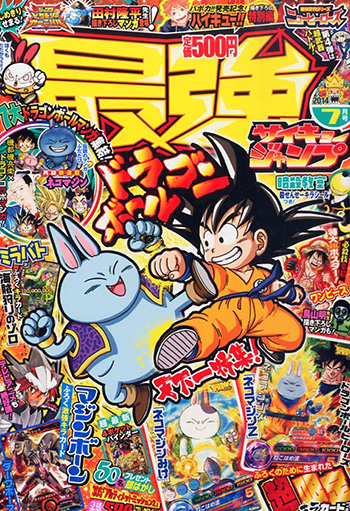 Starting things off is a four-panel comic from creator Akira Toriyama himself (wryly noting that he is now 59 years old), explaining that he was originally contacted to do a special Dragon Ball comic for the issue. However, due to a combination of slacking off and being busy with other work (along with giving the editors baseless reassurance that things were coming along), it was ultimately decided that the issue would be a collection of Dragon Ball content from other authors instead. Toriyama celebrates this decision as something he can really get behind. (Even so, the first chapter of Toriyama’s own Neko Majin series is reprinted as a tie-in with the inclusion of Neko Majin cards for the Dragon Ball Heroes JM4 update, and will continue each month with subsequent chapters.)

As we reported yesterday, a Majin Boo side story from Dragon Ball SD author Naho Ooishi was set for inclusion, but it was not clear if it would just be a repeat of the old quarterly chapter from 2011 or a new chapter entirely. It turns out it is indeed a whole new chapter simply entitled “Dragon Ball SD Majin Boo Extra Story” (ドラゴンボールSD 魔人ブウ番外編 Doragonbōru SD Majin Bū Bangai-hen). This chapter is a “what-if” story about what might have happened if Boo had never met Mr. Satan and fallen under his influence. Boo flies up to God’s Palace and begins eating those present, commenting on his changed appearance each time. The last one left is Pu’er, whose absorption causes Boo to sprout cat-ears. As Boo departs, he encounters a Neko Majin (swimming through the sky, for some reason), who asks if Boo is a Neko Majin, too. Back at God’s Palace, Piccolo emerges with Goten and Trunks, only to find that everyone else has disappeared…! 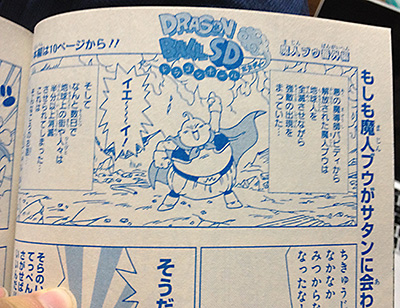 The 30th chapter in Naho Ooishi’s regular, monthly Dragon Ball SD is also included — this one presented in its standard full-color — showcasing more fights against Uranai Baba’s fighters. This chapter breezes through the first two (and a half fights), ending as Goku takes the field against Mr. Mummy. It notably glosses over the infamous “blood-spray” scene through narration, due to what author Naho Ooishi (in a cameo) calls “adult prerogative”.

All new Neko Majin content is also included in the issue — the first since the series’ completion with Neko Majin Z 5 in 2005 — in the form of a bonus Dragon Ball Heroes: Victory Mission chapter by “Toyotarō” also simply entitled “Dragon Ball Heroes: Victory Mission Extra Story” (ドラゴンボール ヒーローズ ビクトリーミッション 番外編 Doragonbōru Hīrōzu Bikutorī Misshon Bangai-hen). In it, Neko Majin V is playing with his Dragon Ball Heroes cards (which he excels in rather than martial arts or magic) when he is challenged by Usa Majin Lop to a duel. Lop reveals his cards, which are those of “Grandpa Z” and “Mike-senpai“. V wants badly enough to trade his own Majin Orb for them, so Lop offers to do exactly that. V complies, handing over his Majin Orb, only after which Usa Majin mentinos that the cards come with the July 2014 issue of Saikyō Jump. Indignant, V challenges Lop to a Dragon Ball Heroes battle in order to win back his Majin Orb. By using his own “Neko Majin Mix” card, along with transporting in Son Goku, he is able to defeat Lop with a combined Kamehameha/Nekohameha. V demands his Majin Orb back, but Lop realizes he left it in the outside world. Outside, several boys are playing with a soccer ball, while Kabra sits by himself playing his 3DS. The ball is accidentally kicked towards Kabra, knocking his game out of his hands. Annoyed, he kicks the ball away instead, earning the ire of the other kids. Walking over to the Dragon Ball Heroes machine sitting out in the middle of nowhere, he finds a marble-like item sitting on it, and thining it’s a superball, he throws it at a nearby rock formation, only for it to shatter. Just then, V appears outside the game, saying that he now has to haunt Kabra. The narration explains that this is how the adventure of Kabra and Neko Majin V began, as Usa Majin Lop, cradling his head, decides to go home… 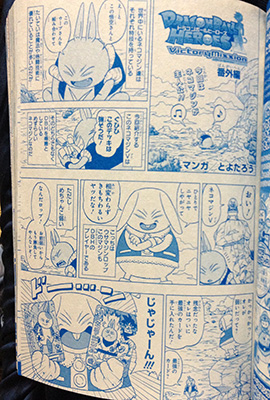 Another chapter of the manga “Charisma Mission” (which is drawing out into something resembling a series now) by Yoshitaka Nagayama, as Engineer Yoshito, Battle Navigator Tsubasa, and Battle Princess Momo illustrate the various features of the game in comedic ways.

The next installment in the ongoing “Anime Comic” for Dragon Ball GT is also included, covering up to the defeat of Liu Xing Long, the Six-Star Dragon, in Episode 51.

There is also a special Dragon Ball crossover with The Tale of Isobe Isobei: It’s Tough Being in the Floating World, penned by its author Ryō Nakama. A young Son Goku encounters the titular Isobei, who is reading a book of shunga (erotic ukiyo-e prints). Goku asks what he is reading, then introduces himself as Goku. However, he misunderstands the archaic language in Isobei’s own self-introduction, and starts calling the samurai “Desōrō” (De sōrou is an old-fashioned copula which takes the place of desu or de gozaru for samurai.) As Isobei continues to try to explain to Goku who he is, he mentions that he could fell the tree behind him in a single stroke, so Goku attempts the same using his fist, doing so easily. As Isobei feigns drowsiness in order to avoid having to show off his own strength, Kame-Sen’nin shows up and takes the book of dirty pictures while Goku waves goodbye to “Desōrō”. 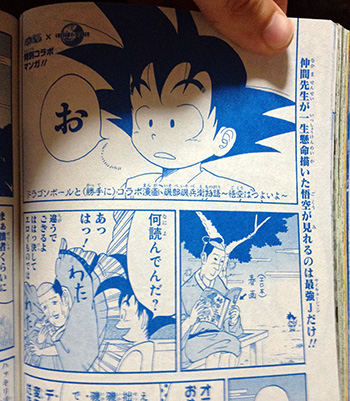 In terms of non-manga content, Naho Ooishi provides her thoughts on Neko Majin, as well as a few more questions to Akira Toriyama himself about scouters and how they work. Stay tuned for a formal translation in the very near future!

A single page splash recaps all of the known information about the upcoming PlayStation 4 “Dragon Ball New Project” video game (also coming to the PlayStation 3 and Xbox 360), though it does not provide much new beyond the same screen shots from the official website other than one new background location.

Included as a bonus pack-in with the issue are Neko Majin Mike and Neko Majin Z cards for Dragon Ball Heroes. 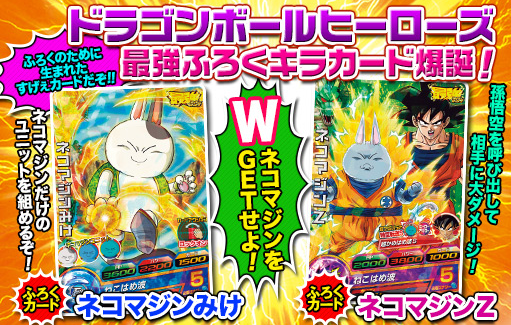 The July 2014 issue of Saikyō Jump is officially due out tomorrow and retails for ¥500. The issue can be ordered at CDJapan and Amazon Japan.

The official Saikyō Jump website is offering a preview of the August 2014 issue which is set to include the usual three Dragon Ball-related series (SD, GT, and Charisma Mission), along with the second installment of Neko Majin ga Iru from original author Akira Toriyama! 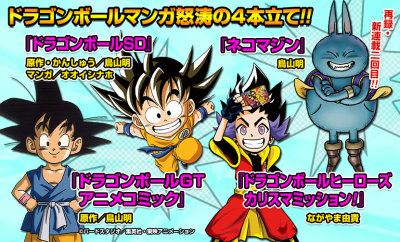