Starting this last weekend J-WORLD Tokyo, an indoor amusement park created by Bandai Namco on the third floor of Sunshine City’s World Import Mart Building in Ikebukuro, began hosting their special main summer event “Dragon Ball Festival 2014” in commemoration of the Dragon Ball Kai TV anime broadcast covering the revival of Majin Boo. The event will run every day from 19 July 2014 to 15 September 2014 with one-time admission tickets costing ¥700 for adults and ¥500 for children. 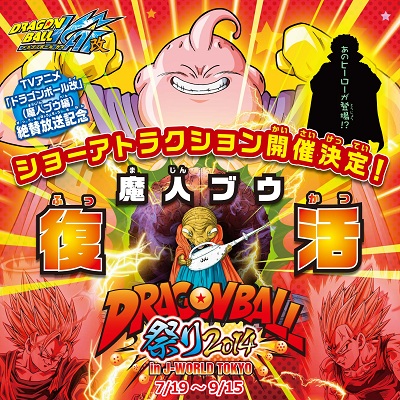 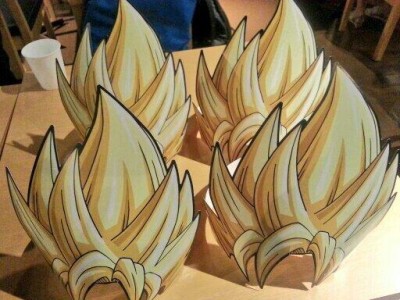 The true highlight of the event is a limited-time showing of “Revive Him! Majin Boo Makes His Appearance!”, a 20 minute video featuring live performances from Bobbidi, Majin Boo, and Mister Satan.

It’s a spectator-type show attraction that has admirably brought to life the grand battle between the Dark Mage Bobbidi and Dragon Ball‘s heroes through a melding of video and live action.

As a special present, each fan in attendance of the live performance will receive a “Majin Boo Boo Cushion”.

Finally, to fulfill the appetite of hungry Dragon Ball fans in attendance, there will be special food provided in the J-WORLD Kitchen in addition to their normal food selection. These delicacies include “Mister Satan’s Champion Sandwich” (roast beef), “Goten and Trunks’ Fusion Plate” (a combo plate with hamburger, curry, and pasta), and “Majin Boo’s Strawberry Cheese Cupcake”.