The 2013 film Dragon Ball Z: Battle of Gods finally sees its home release today from FUNimation and comes packed with the original theatrical version along with a special extended edition. Stay tuned here at Kanzenshuu for a more complete review in the near future, but in the meantime, check out these quick facts: it is everything you actually wanted to know about this home release! 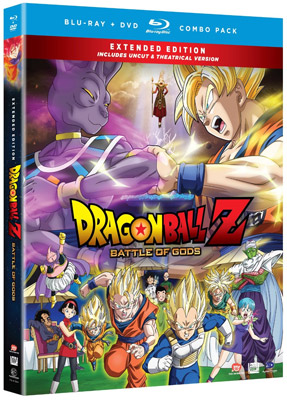 What is “Battle of Gods”?
Dragon Ball Z: Battle of Gods was the first new theatrical film for the franchise in seventeen years, hitting Japanese theaters 30 March 2013. Though its original concepts were created by Toei Animation, original manga author Akira Toriyama entered the production early on to oversee much of the story and dialog. The script is attributed to Yūsuke Watanabe. A musical score was provided by Norihito Sumitomo. Character designs and animation supervision were handled by Tadayoshi Yamamuro. The film was directed by Masahiro Hosoda. The story is written to take place between the defeat of Majin Boo and the 28th Tenka’ichi Budōkai and is officially set in Age 778.

What is in the extended edition?
The extended edition includes just over twenty minutes of additional material, ranging from three-second interstitial transitions to entirely new scenes. Virtually nothing is removed or replaced; it is all additive.

Which region is encoded onto the Blu-ray?
The disc is solely encoded for Region A. Manga UK will be releasing their own version of this release in November.

What name spelling is used for the main antagonist in the subtitles?
Simmons went with a spelling of “Beers” in the subtitle track. For more information on the question, read our own overview. The character’s attendant is adapted with the traditional “Whis” spelling.

Are all of the audio tracks provided in 5.1 surround sound?
The English dub for the theatrical version, the original Japanese track for the theatrical version, and the English dub for the extended edition are all produced in 5.1 surround sound. The odd man out is the Japanese track for the extended edition, which is presented in standard stereo sound.

What kinds of special features are included?
Two featurettes are included along with other, shorter videos adding up to roughly half an hour of bonus material:

Is such-and-such reference kept in the English dub?
For the most part, yes. This includes an off-hand reference to a particular character’s sibling as well as the length of certain types of entertainment. The English dub’s script receives a bit of “punching-up” as seen in the company’s original 2000-onward dubbing, but overall lies somewhere between that and their Dragon Ball Kai treatment.

Are the end credits only provided in English?
Yes, the credits are exclusively written in English accompanied by the English version of FLOW’s “CHA-LA HEAD-CHA-LA”. The Japanese cast is attributed to character names as they appear in the subtitles (Kuririn, Tenshinhan, Kaioshin, etc.). The kanzenban pages are not edited from their original Japanese text.

What types of releases are available?
A two-disc DVD set as well as a three-disc DVD & Blu-ray combo set are available. Each contain both the original theatrical and extended versions of the film.

Where can I purchase this home release?
Most retailers carry the movie. It is also available online from retailers such as Amazon and RightStuf.

I want to know more about this movie!
Head on over to the respective page in our “Movie Guide” for anything and everything you ever wanted to know about Battle of Gods! We have interview translations, character designs, links to our podcast reviews, and much more.

Is there a new movie coming in 2015?
Yes! Check out our article to learn everything there is to know so far.