The January issue of V-Jump, officially slated for release this Friday (21 November 2014), features a detailed “DB Scoop” on the upcoming Dragon Ball Z movie (originally reported by Anime News Network). The scoop features a new visual for the film, the first seen since the movie was announced this past July. It is more than likely the movie’s official poster, which features our main protagonists, Beerus, Whis, Freeza, and two new unsavory characters.

Unlike with the previous film, Kami to Kami / Battle of Gods, no supplementary or alternative English title is provided. The movie will premiere nationwide in Japan 18 April 2015 in both 2D and 3D formats. This release date is a bit earlier than expected by most, but it is perhaps intended to build the movie’s momentum going into the Golden Week holiday break.

At the moment we cannot verify plot details — or Toriyama’s comments — beyond what is currently described elsewhere. However, the general plot details from Anime News Network are as follows:

An Earth where peace has arrived. However, remnants of Freeza’s army Sorbet and Tagoma arrive on the planet. Their goal is to revive Freeza with the Dragon Balls. Their dastardly wish is granted, and the “F” that plans its revenge against the Saiyans is revived…!

Two new characters will appear in the movie: Sorbet (ソルベ) and Tagoma (タゴマ), shown below on the left and right, respectively. Following the fine nuances of the name puns in the last film, these name puns seem awfully transparent. As with all of Freeza’s minions, as described by Akira Toriyama in the Super Exciting Guide volumes, the names are “unified as food items that one puts inside [a refrigerator]”. Therefore, Sorbet gets his name directly from the frozen dessert “sorbet”, while Tagoma’s name is derived from the Japanese word tamago (卵), meaning “egg”. 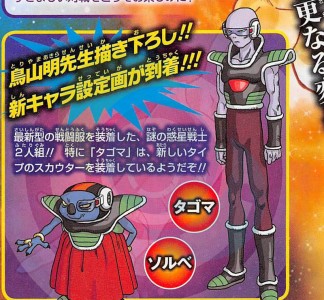 Toriyama’s original designs for the characters are included in the magazine, along with a brief description:

A mysterious pair of planetary warriors, equipped with the latest type of battle armor!! “Tagoma” in particular looks to be wearing a new type of Scouter!!

The tidbit about the new type of Scouter is very reminiscent of what Toriyama revealed in his interview with Naho Ooishi in the July 2014 issue of Saikyō Jump. He stated (bold added for emphasis):

If you’re a soldier in Freeza’s army, you can have one made to order to fit your ear. The different screen colors can be chosen to fit the peculiarities of different aliens’ eyes, or to suit one’s tastes. Also, dual-eye types exist as well.

This comment came just one month prior to the new movie being officially announced, so it is likely that Toriyama slipped this tidbit in solely because of his work on the upcoming movie, possibly having just drawn these character designs. Also of note is the text reading “更なる変” that is cut off in the upper right corner. This is likely the phrase “更なる変身”, which means “further transformation(s)”. Based on the image available, there is no indication whether this is in reference to Freeza or a Saiyan warrior.

As always, stay tuned right here at Kanzenshuu for all the latest news, documentation, and analysis!