While author and illustrator Naho Ooishi has not been one to shy away from diversions and side stories, as of late the standard Dragon Ball SD serialization in Saikyō Jump has been a rather straight-up re-telling of the original manga.

Tomorrow’s March 2015 issue of Saikyō Jump contains a curious chapter of the spin-off re-telling which is perhaps best described as a filler-esque side story. 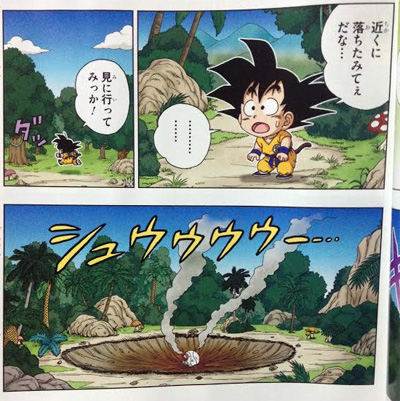 Goku is in the wilderness, training on his own some time after departing from Uranai Baba’s. As he thinks about the fact that his tail is still weak, he looks up to see something like a meteor streaking through the sky and impacting nearby. Going to investigate, he finds a strange sphere in a smoking crater, out of which two youths appear — and both of them have tails, just like him!

Vegeta complains about having to share a pod with Raditz: they’ve sneaked off to this backwater planet to train Raditz’s weak tail in secret, away from the prying eyes of Freeza’s other subordinates. Goku goes up and greets them, but despite the tail in common, Vegeta assumes he is merely one of the planet’s native inhabitants, since Goku’s tail (which has started to grow back after Son Gohan broke it off) is still short. Since Raditz is there to train, as well, they decide to train together.

What ensues on the following pages is a series of tail-training feats and brotherly bonding between the unwitting siblings. As the day comes to a close and their tails have been strengthened, Goku parts on friendly terms with the two strangers, vowing to meet them again someday. They depart, and he marvels at their ride, which is a lot weirder than anything of Bulma’s.

Off in space, the two Saiyans are returning to Planet Freeza No. 79, but a drowsy Raditz’s tail accidentally destroys the controls, and they crash-land. An unamused Nappa asks just where the two of them have been for the past month, but neither can remember: the shock of the impact has given them amnesia.

Dragon Ball SD chapters do not actually receive chapter numbers or titles until they are compiled into the tankobon release (of which there are currently three), so it remains to be seen if this month’s chapter will be included in the regular line-up or classified for the long haul as a side story. However, Naho Ooishi’s comment in the table of contents seems to indicate this is the beginning of a story arc of sorts:

Goku’s solitary training arc has begun! Everyone, please give me your support!

Saikyō Jump abruptly moved to a bi-monthly schedule late last year, making new installments of Dragon Ball SD less frequent but otherwise no different; this issue is the first significant departure from the plot of the original series since the special “Battle of Gods SD” chapter in the April 2013 issue. It is not yet known whether the series will return to its regular format of retelling the main Dragon Ball story afterwards.

The March 2015 issue of Saikyō Jump is available for purchase from CDJapan and Amazon Japan. It also contains the latest chapter of the Dragon Ball GT “animanga”, the 2004 Akira Toriyama one-shot Neko Majin Z 3, and the antics of Yoshito, Tsubasa, and Momo in Dragon Ball Heroes: Super Charisma Mission.