It is technically the 21st in Japan, and so the April 2015 issue of V-Jump has officially gone on sale. While plot details about the upcoming film, Revival of “F”, have been scarce as-of-late, Shueisha’s latest magazine gets the ball rolling once again.

Debuting this month is the first of three chapters for an introductory manga adaptation of the film by Dragon Ball Heroes: Victory Mission author and illustrator Toyotarō. The adaptation is set to tell the story from the early parts of the upcoming film, and so needless to say, it is essentially guaranteed to contain massive spoilers for those wishing to eventually head in to the film entirely blind.

That being said, we have expanded the “Official Spin-Offs” section of our “Manga Guide” to include a new “Movie Adaptations” page which will catalog Naho Ooishi’s Jump Super Anime Tour Special manga adaptation, as well as this new Revival of “F” adaptation by Toyotarō.

The first chapter has a full listing including relevant notes; be on the lookout for special other-Toriyama-works cameos! 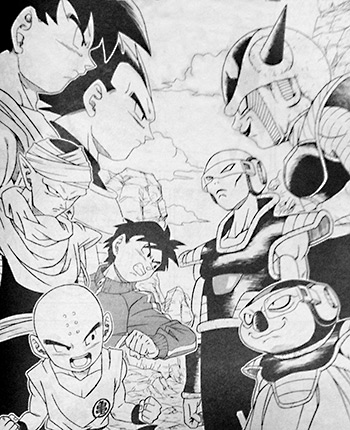 “Toyotarō” is, in all likelihood, a second pen-name used by Dragon Ball AF fan manga author and illustrator “Toyble”. The introductory manga will run for three chapters in the April, May, and June 2015 issues of V-Jump in Japan.