Anime News Network reports that the upcoming Dragon Ball Super TV series will receive a manga adaptation by Toyotarō, which will begin serialization in the August 2015 issue of V-Jump. 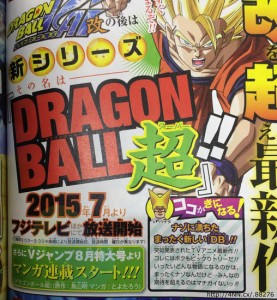 Along with the announcement, which appears in this month’s upcoming July 2015 issue of V-Jump (officially hitting shelves 21 May 2015), a brief message was included from V-Jump’s “elite” editorial staff member Victory Uchida:

The latest TV animation was suddenly announced!! That was a Victory-surprise, even for me!! What on Earth will the story be? It’s such a mystery… There’s no doubt it will exceed everyone’s expectations!!!

While an exact start date has not yet been officially unveiled, it is likely that Dragon Ball Super will begin its broadcast run starting 05 July 2015, taking over the Dragon Ball Kai time slot on Fuji TV. The series will, “…follow the aftermath of Goku’s fierce battle with Majin Boo, as he attempts to maintain earth’s fragile peace.”

Toyotarō, in all likelihood a second pen-name used by Dragon Ball AF fan manga author and illustrator “Toyble”, is most recently responsible for a three-chapter introductory manga adaptation of Dragon Ball Z: Revival of “F”, which ran in the April, May, and June 2015 issues of V-Jump in Japan. Prior to this, Toyotarō penned the monthly Dragon Ball Heroes: Victory Mission promotional manga from the September 2012 to February 2015 issues of V-Jump.

At the moment it is unclear whether the Dragon Ball Super manga adaptation will be a true adaptation of its TV series counterpart, or will merely serve as a promotional tool to provide previews of upcoming episodes and story lines. It is worth noting that since the manga adaptation will be featured in V-Jump, it will most likely be released on a monthly basis, which greatly contrasts the weekly TV series schedule. In addition to that, the first chapter of the Dragon Ball Super manga is scheduled to be published two weeks prior to the TV series’ premiere.