A widely-circulated tweet from @RyGuy176 yesterday afternoon sent a wave of confusion and anger throughout the Dragon Ball video game community: 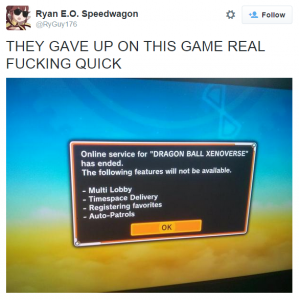 Many users received the same message when signing in to the PlayStation 4 version of Dragon Ball XENOVERSE, while others saw no such message. We at Kanzenshuu were unable to replicate the error.

Speaking to Game Informer, Bandai Namco has stated that the company currently has no plans to deactivate this specific functionality:

Both the American and European branches of Bandai Namco tweeted out similar statements.