Believe it or not, there is still a wealth of Dragon Ball Z: Revival of “F” material for us to cover!

Earlier this year, Japanese theatrical attendees were able to grab a slew of bonus items with their paid ticket, including a special booklet entitled Volume “F”. This “Jump Comics Godliest Edition” compiled Akira Toriyama’s original script for the film alongside “Inside Stories” with Toriyama’s commentary on the film itself. 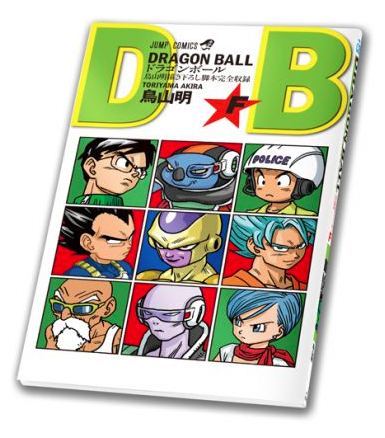 The latest addition to our “Translations” section, adapted here from Volume “F”, includes Toriyama’s opening comment along with his eight “Inside Stories” that complement the script:

It’s really embarrassing to have this called a “screenplay”. It’d probably be more accurate to say it’s just a memo. It’s simply something I idly dashed off for the staff, just to help explain the flow of the story and the dialogue! Never in a million years did I think it would get published. If any of you are trying to become scriptwriters, please don’t use this as an example!!

Then there’s the dialogue. The original author knows each character’s personality and backstory, so they can naturally think up dialogue that suits them.

Read translations of the full comments, which has been archived in our “Translations” section!