In conjunction with the 5th anniversary of Dragon Ball Heroes as a whole, the game’s official website has announced a daily promotion leading up to new material for Dragon Ball Heroes: Victory Mission, Toyotarō’s promotional manga originally serialized in V-Jump. 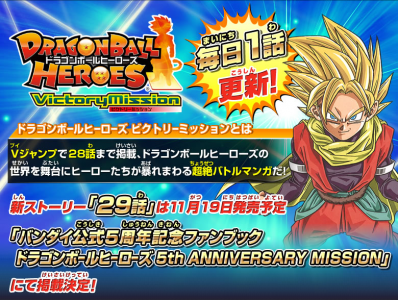 Beginning today with the first chapter, one chapter will be published daily from the original V-Jump run. This will culminate 19 November 2015 with the “Bandai Official 5th Anniversary Fanbook: Dragon Ball Heroes 5th Anniversary Mission” which will include a new, 29th chapter. Unfortunately, the page does not yet explain how to actually obtain this fanbook; it is listed to “go on sale” next month, which indicates some sort of product, be it physical, digital, or perhaps both.

UPDATE: The official fanbook is available for pre-order via CDJapan for ¥815 + tax. 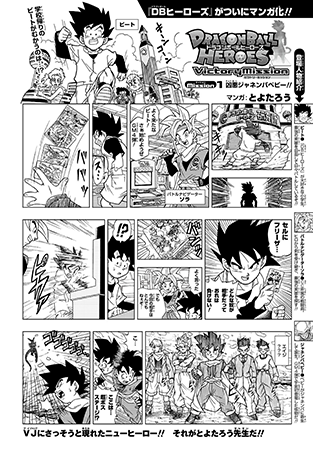 Dragon Ball Heroes: Victory Mission began in the November 2012 issue of V-Jump as a two-page, seemingly-one-off promotional mini-manga for the card-based arcade game. As the months went on, the chapters expanded to more pages and began directly continuing onward from each other into a traditional, serialized story. New cards, techniques, and characters from the arcade game often showed up in the manga months ahead of time to help promote new updates and campaigns.

The February 2015 V-Jump+ digital bonus material compiled all 28 chapters for readers who entered the code within the allotted time period. As Victory Mission went on hiatus, Toyotarō moved on to a three-chapter, introductory manga adaptation of the 2015 theatrical film, Dragon Ball Z: Revival of “F”. Toyotaro is currently responsible for the Dragon Ball Super manga adaptation, also running monthly in V-Jump; the fifth chapter was released yesterday within the December 2015 issue.

Thanks to TheDevilsCorpse for the heads-up!