As part of the continued 30th anniversary celebration for Dragon Ball (which has now technically hit 31 years as-of today), the January 2016 issue of V-Jump (out tomorrow, 21 November 2015) provides an announcement of a Dragon Ball Super History Book (超史集 or Chōshishū) set for release 21 January 2016 in Japan. 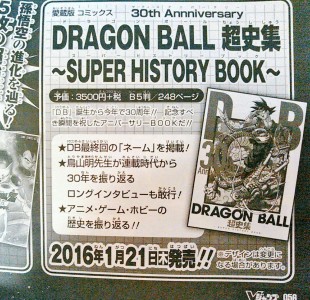 This year is the 30th anniversary of Dragon Ball‘s birth!! This is the anniversary book to commemorate this momentous milestone!!

– Includes the storyboard for the final chapter of Dragon Ball!
– Toriyama-sensei commits to a long interview looking back on the last 30 years since serialization began!
– We look back on 30 years of animation, games, and hobbies!!

The 248-page, B5-sized book will retail for ¥3,500 + tax. The advertisement notes that the final design may differ from the image.

Thanks to masa for the heads-up!