The official Dragon Ball 30th anniversary website has launched a new special page covering the upcoming 30th Anniversary Dragon Ball Super History Book set to hit shelves 21 January 2016. The page includes the book’s final cover design and notes it will include a “reversible special poster” featuring the first chapter’s title page on one side and the final chapter’s title page on the other. 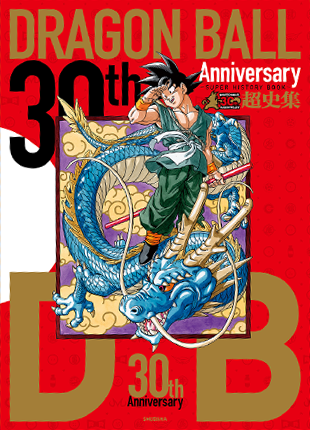 The book will feature a lengthy interview with original author Akira Toriyama, who shares his “secret” stories and memories from the series serialization in Weekly Shōnen Jump. The interview is advertised to be his “last super long interview”, although the page does not clarify what exactly this means. In addition to the interview, Toriyama will also provide commentary on some of his Weekly Shōnen Jump cover illustrations. The book will also feature some of Toriyama’s previously unpublished illustrations, including character and setting sketches, the final chapter’s storyboard, and character and set designs for Dragon Ball Super.

In addition to the Toriyama-related material, the book will also detail the animated TV series and movies, card games, video games, and various other merchandising items released over the last 30 years. The section will also include production staff interviews.

The 248-page, B5-sized book will retail for ¥3,500 (+ tax) and is currently available for pre-order via CDJapan and Amazon Japan.