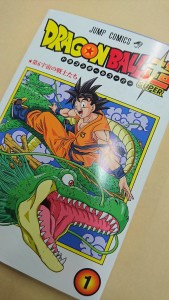 The collected manga volume, due out 04 April 2016 in Japan, will span 192 pages and retail for ¥400 + tax. The specific chapter contents are thus far unknown. The volume is available for pre-order via CDJapan and Amazon Japan.

The title of the volume, “Warriors of Universe 6” (第６宇宙の戦士たち; Dai-Roku Uchū no Senshi-tachi), appears to be the same as that of the seventh chapter.

The tenth chapter of the Dragon Ball Super manga will be released this week, 19 March 2016, within the May 2016 issue of V-Jump in Japan.