This week’s May 2016 issue of Saikyō Jump in Japan (released 01 April 2016) has announced that Frost and Botamo of Dragon Ball Super‘s Universe 6 will join the Nintendo 3DS game Dragon Ball Z: Extreme Butōden as Z-Assist characters in a forthcoming update. 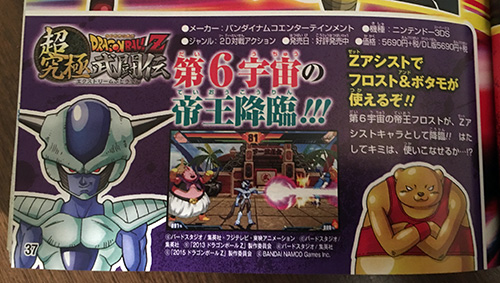 The quick advertisement focuses on Frost, who is seen delivering a Death Beam-like attack, with a promotional splash stating, “The Evil Emperor of Universe 6 Descends!!!”

The game’s most recent patch in Japan (Version 1.3.0) added yet another four Z-Assist characters on top of the ever-growing list.

Thus far, none of the game’s patches have been released or localized outside of Japan.