A leaked page from next week’s 2016 #21/22 issue of Weekly Shōnen Jump in Japan provides an overview of the upcoming forty-second episode of the Dragon Ball Super TV series.

With a tagline of “Zen’ō, Lord(s) of the 12 universes, make(s) a surprising suggestion!” the issue describes the episode and the new “Zen’ō” (全王), god/lord(s?) of “everything” (i.e., the twelve universes):

Goku and the other members of Universe 7’s team have safely notched their victory [against Universe 6]. But their victory celebrations are short-lived, as the Zen’ō (“Lord[s] of everything”), the individual(s) standing at the pinnacle of the 12 universes, appear(s) before them! And so the tale takes an unexpected turn. 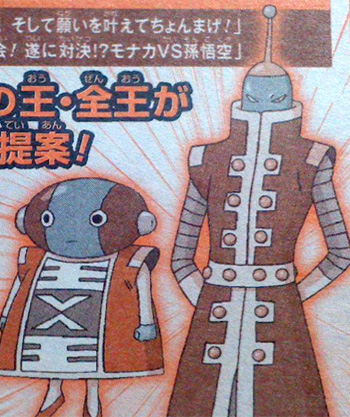 Due to the inherent vagueness of pluralization in Japanese, without further context, Kanzenshuu is unable to explicitly confirm whether the duo of characters shown are both “Zen’ō” or if, similar to other character duo introductions (God/Popo, Kaiōshin/Kibito, Beerus/Whis, etc.) one character is a “Zen’ō’ while the other is an attendant.

Though not a perfect equivalent, per the character’s clothing, it will be interesting to see whether “Xen’ō” may be an intended alphabet spelling or reference, and whether or not there are ties to previous “Xeno-” branded stories and merchandise in the Dragon Ball franchise. UPDATE: As apparent in Episode 40, the motif on the character’s clothing is actually the character for “everything” or “all” (全 zen), appearing both rightside-up and vertically mirrored.

The fortieth episode of Dragon Ball Super (“The Conclusion At Last! Who Will Prevail? Beerus, or Champa?”) airs tomorrow (24 April 2016) in Japan at 9:00 a.m. on Fuji TV. The aforementioned forty-second episode airs 08 May 2016, followed the next week by a special appearance from Arale-chan in the forty-third episode.

Thanks to various folks on Twitter and our own forum for the heads-up!