Bandai Namco’s flythroughtime.com countdown/teaser website has unveiled Dragon Ball XENOVERSE 2 coming in 2016 to the PlayStation 4, Xbox One, and PC with a new website at dragonballxenoverse2.com.

The company provided the game’s first trailer on their YouTube channel, tasking the player with protecting Dragon Ball‘s past as well as teasing, “outcomes you wished were different.”

The Most Expansive Videogame in Dragon Ball History Returns with Richer Environments, Bigger Battles, Additional Character Creation Options, with More Details to be Revealed at E3 2016!

Developed to fully utilize the power of current generation gaming consoles and PCs; DRAGON BALL® XENOVERSE 2 builds upon the highly popular DRAGON BALL XENOVERSE with enhanced graphics that will further immerse players into the largest and most detailed Dragon Ball world ever developed. DRAGON BALL® XENOVERSE 2 will deliver a new hub city and the most character customization choices to date among a multitude of new features and special upgrades. Additional details and features pertaining to DRAGON BALL® XENOVERSE 2 will be revealed at E3 2016 (June 14-16) in BANDAI NAMCO Entertainment America Inc.’s demo theaters, located in rooms 303A&B in the South Hall of the Los Angeles Convention Center.

“The Dragon Ball franchise is a crown jewel and a perennial fan-favorite of BANDAI NAMCO Entertainment’s robust anime videogame portfolio and DRAGON BALL® XENOVERSE 2 will build upon that illustrious legacy.” said Eric Hartness, Vice President of Marketing at BANDAI NAMCO Entertainment America Inc. “With DRAGON BALL® XENOVERSE 2, we’re working diligently with the DIMPS team to pull out all the stops and push the Dragon Ball videogame experience to new heights.”

DRAGON BALL® XENOVERSE 2 is currently rated “RP” for Rating Pending by the ESRB. The game will be coming to the Americas for the PlayStation®4 computer entertainment system, Xbox One, and STEAM® for PC in 2016. To find out more about DRAGON BALL® XENOVERSE 2, head over to www.dragonballxenoverse2.com. To learn more about BANDAI NAMCO Entertainment America Inc.’s other products go to: http://www.bandainamcoent.com/home.html or follow us on Facebook at https://www.facebook.com/BandaiNamcoUS.

The Japanese version of the trailer features an extra stinger with Time Patrol Trunks saying, “Even so, I’m…” 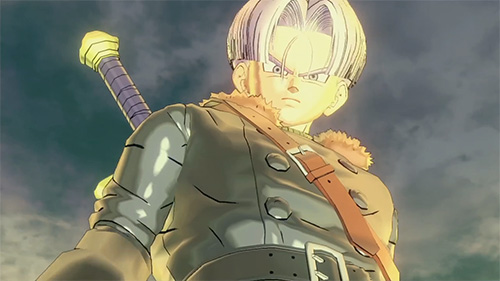 The original Dragon Ball XENOVERSE, developed by Dimps for Bandai Namco, was announced in May 2014 and launched in February 2015 for the PlayStation 3, PlayStation 4, Xbox 360, Xbox One, and PC (via Steam) internationally. The game saw a user-created character teaming up with Trunks and the Kaiōshin of Time to correct anomalies and disruptions to the timeline caused by the villains Mira, Towa, and Demigra. As of February 2016, the game had shipped over three million copies worldwide.