Last week’s July 2016 issue of Saikyō Jump in Japan wrapped up the retelling of the 22nd Tenka’ichi Budokai in Naho Ooishi’s Dragon Ball SD with the series’ 43rd standard chapter. In a surprise twist, the manga will skip the Demon King Piccolo and 23rd Tenka’ichi Budokai arcs entirely.

As Tenshinhan and Goku fall (following his Kamehameha-propelled headbutt), Piccolo is heading for the tournament himself to massacre the martial artists and to steal the Dragon Balls. As he and Piano approach, Goku — with the expected Great Ape silhouette behind him — inadvertently flies directly through Piccolo’s airship. The demon laments dying in such a way and spits out an egg, telling his child to avenge him one day. Meanwhile, Raditz complains about being forced to come out to these parts in order to gather the remaining Saiyans. He vaguely remembers seeing this place before, but brushes it off, cackling, “just you wait, my younger brother Kakarrot!” Just then, a round object (Piccolo’s egg) collides with Raditz’s pod, sending him careening in the other direction. Having strayed from his path toward Earth, he calls for help from Nappa and Vegeta, but they are busy at the moment so it will probably be about 10 years. Vegeta, however, decides that they have no need for that useless fool. And so, unbeknownst to anyone, the mysterious flying object that saved the Earth from the evil hand of the Saiyans was none other than the egg of Piccolo’s offspring. Back on the ground, Tenshinhan is declared the winner. In the middle of the tournament, Goku defeated the mightiest enemies he was supposed to fight later on with incredible momentum. Echoing the turtle sage’s line at the end of Chapter 194, the narration declares that the story is not yet over and that it will continue for just a little bit longer with “Z-level” action! A blurb on the side of the page announces the invasion of the Saiyans next chapter! 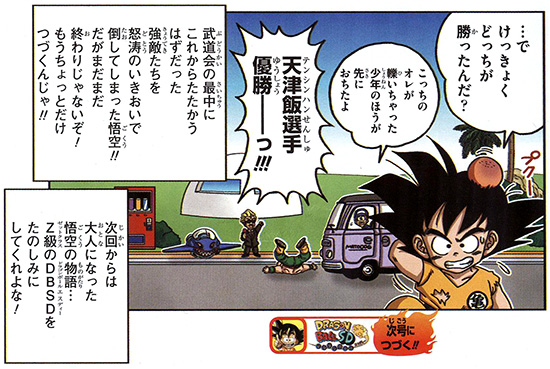 Dragon Ball SD began with Saikyō Jump as a quarterly publication with four total issues in 2011 re-telling major aspects of the franchise in an even more childish tone. When the magazine switched to a monthly format in 2012, Dragon Ball SD started over at the very beginning of the series with the same kind of writing and artistic style. The publication switched to a bimonthly release schedule in late-2014. The fourth collected volume of the series was released back in February 2016 covering up through chapter 38.

The third collected edition of Dragon Ball SD was released last month in France from Glénat.