Bandai has announced Super Dragon Ball Heroes, an update to the successful card-based arcade game in Japan, scheduled to launch in autumn 2016. 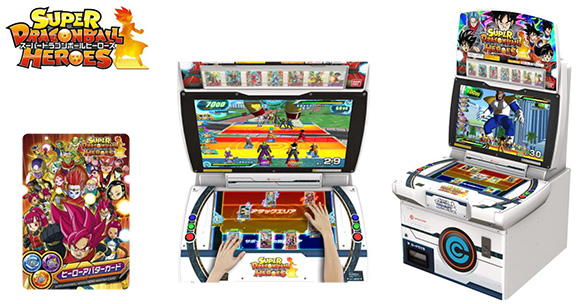 The basics of Dragon Ball Heroes will remain unchanged, with the player placing cards on the panel and moving them around to control the characters on-screen; the number of cards used in battle will increase from five to seven, however. The monitor will be 32 inches (140% larger than the old one) to facilitate a “more dynamic” battle. The flat panel is also now a touch-panel monitor, allowing for special “touch actions” that players can activate. All previously-released Dragon Ball Heroes cards will be compatible with the new machine. The game will also introduce “Virtual Cards” that affect battle conditions, which will only exist as digital data (as opposed to the standard physical cards), but can be controlled alike all the same.

Bandai is looking to appeal to new and old fans alike, with a specific target demographic of boys aged nine to twelve years old. The game will be placed in arcades, stores, amusement parks, etc. around Japan, and will be shown off at the company’s booth at “International Tokyo Toy Show 2016” from 09 June 2016 to 12 June 2016.

Thanks for always playing Dragon Ball Heroes! As the original author, I was really happy to hear last year how it was entering its fifth year and still doing better than ever. Just like the Saiyans, it’s constantly evolving; from now on, please enjoy Super Dragon Ball Heroes!!