Following up on our translation of the Akira Toriyama and Masakazu Katsura discussion from Young Jump in 2010, our latest translation for the archives jumps back in time a bit to 2008 with the release of Sachie-chan GOOD!! in Jump SQ. Whereas 2010’s Jiya continued the story of the Galactic Patrol (later to be heavily expanded upon in 2013’s Jaco the Galactic Patrolman), it was Sachie-chan GOOD!! that established the loosely-connected series. 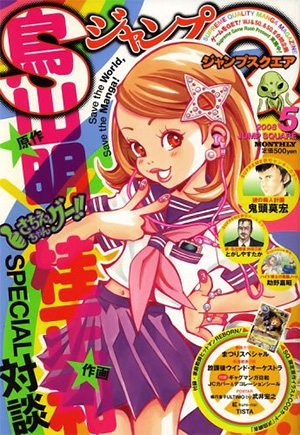 In this discussion, printed alongside the one-shot in the May 2008 issue of Jump SQ in Japan (released 02 April 2008), the two discuss their “ultimate collaboration” with Toriyama providing the story and Katsura providing the artwork, along with all the trials and tribulations that come along with such an arrangement.

Toriyama:
Since way back, I’ve enjoyed doing the storyboard, but really hated inking. So, I was simply glad to get just the good part.

Katsura:
Although I was quite the nag.

Toriyama:
You were a nag, all right. (laughs) You read the storyboard and said, “There’s no content.” I like stuff without any content. But he really wants to put some actual content in. Things like “human themes”. I hate that kind of stuff. (laughs)

Katsura:
With this job, I can now confidently say that Toriyama-san actually aims to draw things devoid of content. So for me, this storyboard was my archenemy. He deliberately does it so as not to put in anything that invites emotion. Plus, Toriyama-san’s stories progress with high energy the whole time.

Toriyama:
Even I only realized that part after you told me the other day.

Katsura:
So, to put it badly, you could say the tale has no climax…. But that’s Toriyama-san‘s touch, so whether I should keep that in, or change it up… I still haven’t come to an answer.

A few correlations are drawn to Dragon Ball throughout the discussion, such as Toriyama’s designs (seen below) feeling as if they could be right at home there, while Katsura and Toriyama also discuss their differing attitudes on risqué inclusions. 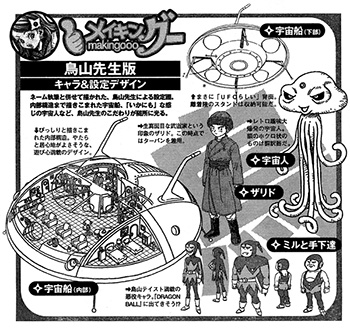 At this point in 2008, the Dragon Ball franchise was in a bit of a holding-pattern: the Jump Super Anime Tour Special would not debut until later that year, and both the American live-action film Dragon Ball Evolution and the 20th anniversary “refresh” series Dragon Ball Kai were still about a year off. To see the beginnings of the Galactic Patrol combined with Toriyama’s outlook on content development is fascinating to put in historical context.

This interview has been archived in our “Translations” section. Stay tuned for even more Toriyama and Katsura antics translations!