Continuing onward from the previous ten chapters, Viz has added their English translation of the Dragon Ball Super manga’s eleventh chapter to their website. 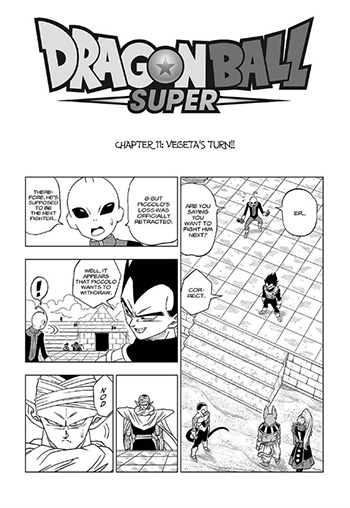 The respective page in our “Manga Guide” has been updated with this release information. New spellings to this translation include that of “Cabbe” (Cabba, the Universe 6 Saiyan) and “Otto Magetta” (the metal man from Universe 6’s Galactic System 66950).

While the Dragon Ball Super television series has been licensed for certain international territories, no announcement of a home release or traditional television broadcast has been made for North America. The series was recently announced to receive a weekly simulcast on services such as Crunchyroll and Daisuki.

The Dragon Ball Super manga began in June 2015 as a promotional tie-in for the television series. The manga runs monthly in Shueisha’s V-Jump magazine, with the series’ seventeenth chapter recently printed k in the magazine’s December 2016 issue. Illustrated by “Toyotarō” (in all likelihood, a second pen-name used by Dragon Ball AF fan manga author and illustrator “Toyble”), the Dragon Ball Super manga covered the Battle of Gods re-telling, skipped the Resurrection ‘F’ re-telling, and “charged ahead” to the Champa arc to act as further promotion for the television series. Viz is currently releasing free digital chapters of the series, and will release their own collected print edition beginning in May 2017.