While we typically add batches of articles to the “Press Archive” here on Kanzenshuu, one particular magazine stood out enough to warrant its own individual update: the February 1996 issue of Mangazine.

Like other magazines of the day — such as Protoculture Addicts — Antarctic Press’ Mangazine featured original cover art showcasing the series of focus in that respective issue. The February 1996 issue featured an original Dragon Ball illustration by Robert DeJesus & Bryant Velez. 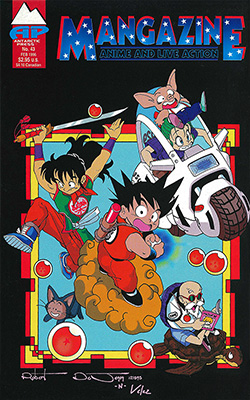 The issue’s feature article — “Gotta Have That Dragon Ball” — is a surprising read for early 1996. While other magazines shifted to coverage of FUNimation’s initial attempt at dubbing the series while simultaneously struggling to cover the entire rest of the franchise (complete with baffling transliterations and incorrect hearsay), author Phil Lipari drops perfectly valid romanization and translation choices here in Mangazine while concisely describing the full story. It is hardly award-winning writing, but compared to the other contemporary material, it is worlds ahead.

This article’s transcription has been added to our “Press Archive“. Stay tuned for future updates, where we will contrast the sentiment and consensus surrounding Dragon Ball GT‘s launch in Japan alongside its official debut in America many years later!