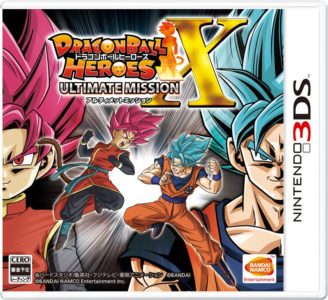 The March 2017 issue of Shueisha’s V-Jump magazine dives in to the story and new features coming to the game, a follow-up to 2013’s Ultimate Mission and 2014’s Ultimate Mission 2, themselves portable conversions of the on-going, card-based arcade game: 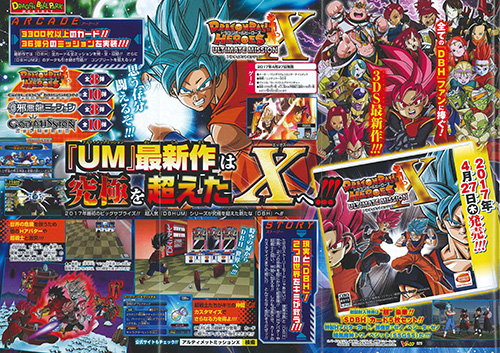 The real world and DBH! You will save those two worlds!!! It’s not just a story mode!! It’s a super adventure that has you travelling all over both the real world and DBH world!! You’ll fight other Hero Avatars and super-warriors, gaining allies!! Plus you can grow and customize your cards?! Looks really fun!!

Super-warriors become your allies!! Gain greater power through customization!!! Over 240 super-warriors appear!! Card abilities can even be strengthen with items!!

Clash with other Hero Avatars and super-warriors to save the world from danger!!! Events happening in DBH are influencing the real world?! Set off on an adventure into the world of DBH!! Everything in this store besides the DBH machines have vanished!! As you progress through the adventure, you can change this reality too?!

The Ultimate Mission games’ website portal at dbhu.channel.or.jp has been updated to reflect the upcoming game.

Neither of the previous Dragon Ball Heroes: Ultimate Mission games were localized and released outside of Japan. By default, the Nintendo 3DS is region-locked; a Japanese system is required to play the game. Ultimate Mission 2 continued to receive free content expansions up through early last year.