Toei’s official Dragon Ball Super website has unveiled character designs for several gods and fighters from Universe 9 and one god from Universe 11, all in conjunction with and anticipation of the new, on-going “Universe Survival arc” in the series. 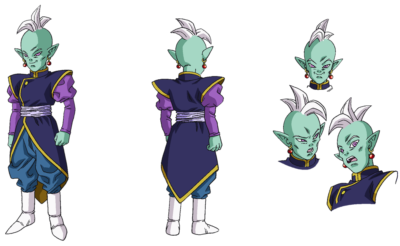 The Kaiōshin of Universe 9. Tends to make fun of the other universes a bit.

While “rō” (老 meaning “old” or “elder”) has been used before in the series (in reference to the Elder Kaiōshin that had been locked away in the Z-Sword several generations prior), this new character’s name is written out in katakana (ロウ ro – u). Masutani had previously contributed the voices of the anthem singer at the Universe 6 vs. 7 tournament, and as noted via his Twitter account, the voice of the Universe 6 Kaiōshin (which was not credited during the respective episode).

The God of Destruction of Universe 9. Is indecisive and hardly able to destroy anything.

Sidra’s name (shi – do – ra) likely comes from the Spanish “sidra” referring to an alcoholic cider (fitting with previous God of Destruction puns on beer and champagne). Mamiya previously played a chef in the first episode of Dragon Ball Super.

Also known as “Kicker Basil”, he’s the youngest brother of Trio the Dangers. A fast and agile warrior who specializes in footwork.

Basil’s name (ba – ji – ru) is taken directly from the word for “basil“. Koyama previously played one of the Barbarians during the “Future Trunks arc”.

Also known as “Poison Bergamo”; the middle brother of Trio the Dangers. A warrior who freely manipulates poison. He always uses poison, and never wins fair-and-square.

The third and final member of the Trio of Dangers (トリオ･ザ･デンジャーズ Torio za Denjāzu) — Lavenda (ラベンダ Rabenda) — will be previewed in an upcoming issue of Weekly Shōnen Jump in Japan.

The Kaiōshin of Universe 11. A gentle Kaiōshin with a strong sense of justice who values life.

The name “Kai” is self-explanatory (written here for the new character in katakana as カイ ka – i), likely coming from the 界 (kai) in “Kaiōshin” meaning “world”.

The “Universe Survival arc” began 05 February 2017 with the seventy-seventh episode of the television series. The Dragon Ball Super television series airs Sunday mornings at 9:00 a.m. on Fuji TV in Japan. The series is available for free and premium viewing on licensed sites such as Crunchyroll, Daisuki, and AnimeLab. New episodes are added — in their original Japanese language with accompanying English subtitles — the same day as their Japanese broadcast.