On the cusp of yet another monthly Dragon Ball Super manga chapter release, we start to see the following question pop up repeatedly within our own community and abroad: “When does V-Jump come out?”

The answer is set in stone and has not changed for years, but as new fans come in and as Dragon Ball Super‘s production continues its odd storytelling split between the television series and the printed page — not to mention the continued struggle with piracy and leaks — we understand how people might be confused. Here is a brief overview of the most relevant publications, their release dates, and their content:

V-Jump (ブイジャンプ or Vジャンプ, née “Virtual Jump”) is Shueisha’s multimedia-focused magazine. Its primary coverage is that of video games from its partners and advertisers (everything from console to mobile to arcade games); for Dragon Ball, this is generally multi-page color spreads near the beginning of the issue. V-Jump‘s coverage does also extend to the occasional interview and feature on a series independent of game content. Most notably right now, this includes the serialization of Toyotarō’s Dragon Ball Super “comicalization”. Previous Dragon Ball manga within V-Jump has included Toyotarō’s own three-part Resurrection ‘F’ introductory manga in 2015, and before that, his Dragon Ball Heroes: Victory Mission series from 2012-2015. Naho Ooishi’s Episode of Bardock manga ran in the August, September, and October 2011 issues of the magazine. Victory Mission was not even the first card-based spin-off manga for Dragon Ball within V-Jump‘s pages! Hobby Warrior: Burn On, Bui! (story by Mitsuru Misaki and art by Ryūji Tsugihara) was published in the magazine’s original trial run between 1990 and 1991, following the title character (“Bui” for “V”) as he partakes in Carddass battles. 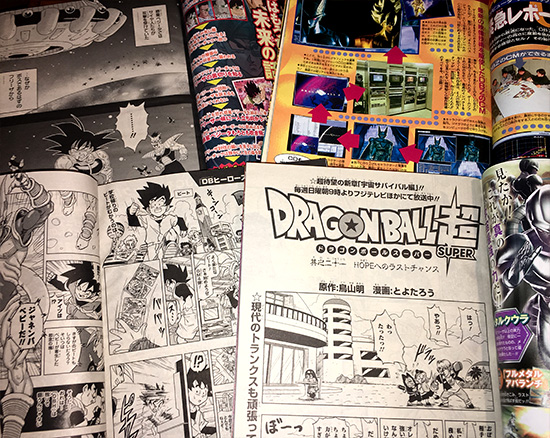 V-Jump is released on the 21st of each month, barring a Sunday or a holiday, in which case it gets moved up a day (or two, in the case that Monday is a holiday). There are very rare deviations to this schedule; for example, the February 2017 issue of V-Jump was released 17 December 2016 to coincide with that weekend’s Jump Festa in Tokyo (where more details on Dragon Ball Super‘s “Universe Survival arc” were set to debut). Issues are dated ahead by two months; for example, the May 2017 issue hits store shelves 21 March 2017.

As an aside, Viz is currently releasing free, English-translated Dragon Ball Super manga chapters digitally on their website. Chapters are released Fridays on a biweekly basis. As of this article’s publication, Viz is currently one chapter behind, and is expected to catch up next month. We do not yet know how their schedule will continue (if at all) once they reach this point.

These days V-Jump runs in the ¥500-600 range (roughly $5-6). With shipping from Amazon Japan to most regions within the continental United States, a single issue will run you $15-16. This is roughly the same markup you would pay at a local, stateside Kinokuniya or other Japanese book store. Like most magazines, V-Jump is a first-come, first-served, available-until-gone sort of production. There have been rare cases of reprints to keep circulation afloat, but in general, those looking to purchase an upcoming issue are best served by pre-ordering (Amazon Japan / CDJapan).

Saikyō Jump (最強ジャンプ) is Shueisha’s younger-child-focused spin-off magazine. Its main content focus is “chibi” or “SD” (childish, “super deformed”, exaggerated) stories featuring popular series such as Dragon Ball, Naruto, and One Piece. Due to the longer timespan between issues compared to V-Jump, Saikyō Jump‘s promotional coverage tends to be short recaps of information already made available elsewhere, or brief summaries for a month’s worth of upcoming content. The magazine began as a quarterly publication with four total issues in 2011. The magazine switched to a monthly format in 2012, and switched again to a bimonthly (every other month) release schedule in late-2014.

In the beginning, Dragon Ball content was limited to just Dragon Ball SD, but as-of-late this has expanded to no less than five related series:

Unlike Charisma Mission which received a replacement and later official continuation, one Dragon Ball spin-off series has since been phased out entirely after an 11-chapter run: Dragon Ball Discross Divine Power God MAX!! by Katsuki Hirose, which began in the March 2015 issue. This was yet another spin-off series with heroes using the various Dragon World characters and transformations in conjunction with the (now discontinued) Dragon Ball Discross physical arcade game. The chapter’s final page in the November 2016 issue stated, promoting the author’s shift to a new Digimon comic in the same issue:

The Discross battle continues! Thank you for all your support up till now! The author’s next work begins on page 354!

Saikyō Jump has also been known to include bonus chapters of its regular series as well as V-Jump regulars; the July 2014 issue, for example, featured three additional bonus chapters by various artists. The magazine has occasionally included miscellaneous chapter reprints in addition to its standard series. Neko Majin Z‘s first chapter was reprinted in the November 2014 issue followed by the remaining Z chapters one at a time in the next four issues. The first Episode of Bardock chapter was reprinted in the magazine’s third 2011 quarterly issue. 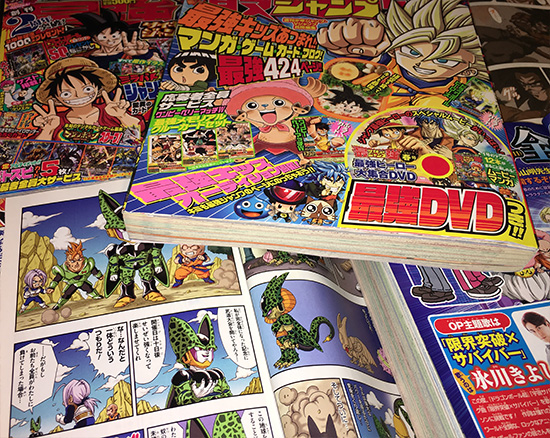 Saikyō Jump is currently released in time for the first weekend of every other month, starting with that year’s January issue releasing in the previous December; for example, the January 2017 issue was released 02 December 2016.

The magazine runs in the ¥400-600 range (roughly $4-6). With shipping from Amazon Japan to most regions within the continental United States, a single issue will run you $15-16. This is roughly the same markup you would pay at a local, stateside Kinokuniya or other Japanese book store. Like most magazines, Saikyō Jump is a first-come, first-served, available-until-gone sort of production. In general, those looking to purchase an upcoming issue are best served by pre-ordering (Amazon Japan / CDJapan).

Dragon Ball SD is the only Dragon Ball-related Saikyō Jump series receiving a collected edition (print/digital), though its first four quarterly chapters were not included.

Weekly Shōnen Jump (週刊少年ジャンプ) is Shueisha’s main, weekly manga anthology aimed at young boys, and is the publication where Dragon Ball was originally serialized. It is released each Monday in Japan (barring the same holiday schedule as other magazines), with a double-issue for breaks such as New Year’s, Golden Week, Bon Festival, and Christmas. Issues are also forward dated a few weeks; for example, the 2017 #16 issue will hit store shelves 20 March 2017.

These days, Dragon Ball content is generally limited to weekly promotions for upcoming Dragon Ball Super episodes, and the occasional video game preview. Jaco the Galactic Patrolman was serialized in the magazine in 2013. 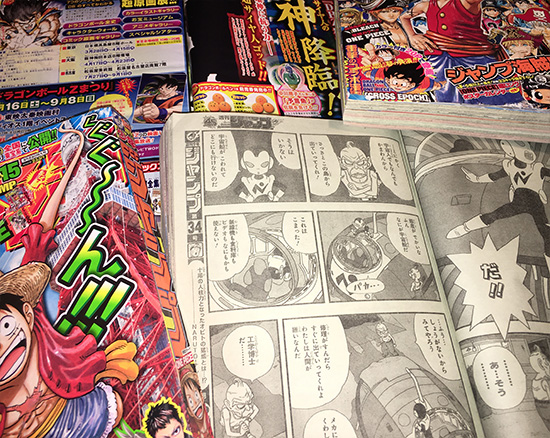 The magazine runs in the ¥200-300 range (roughly $2-3). Fewer online retailers stock this weekly publication, as its size and cheap paper quality are intended to make it an ephemeral, toss-away product while the individual series’ collected editions are the ones intended for long-term archival.

Of the various magazines out there, Animage, Animedia, and Newtype are the most popular; these are all generally released on the 10th of each month. These magazines all run in the ¥700-900 range (roughly $7-9). Like Shueisha’s publications, these magazines sell out quickly and should be pre-ordered if you are interested in a particular issue.

While not released by Shueisha themselves, these other anime magazines — particularly when a Dragon Ball series is actually airing on television — occasionally have related promotional content. These days it tends to be summaries and staff listings for upcoming Dragon Ball Super episodes, but in the past included countdowns/lists, interviews, and other special features. 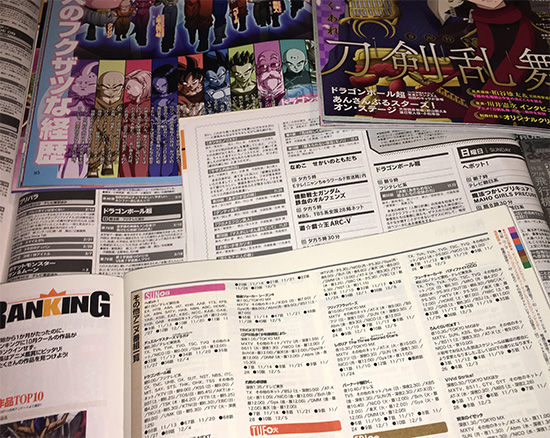 These magazines likewise tend to sell out quickly and should be pre-ordered if a particular issue is desired.

While these magazines are not directly related to Dragon Ball, you may see them brought up from time-to-time.

Monthly Shōnen Jump (月刊少年ジャンプ) ran from 1970 to 2007 featuring series such as Claymore, Beet the Vandel Buster, Zenki, and Kekko Kamen. Akira Toriyama’s parody/spin-off series Neko Majin debuted in the magazine for several of its chapters, while other chapters were later reprinted in Monthly Shōnen Jump following their debut in other publications such as Weekly Shōnen Jump.

Hopefully we have taken a simple question, expanded it in a very long and convoluted way, and brought it back around again to something a bit more understandable!