Narrator: Who will win in Goku’s limit-breaking battle with his mightiest rival, Jiren of Universe 11?
Goku: Dragon Ball Super airs at 9:00 a.m. on October 8th.

The Dragon Ball Super portion of the preview does not appear to show any actual upcoming footage in its discussion of Goku’s upcoming battle with Universe 11’s Jiren, but rather animates the first look at Goku’s new “transformation” shown off in last week’s October 2017 issue of V-Jump (following its initial tease in a new visual back in June):

A certain transformation appears in the latest visual…?!

Finally, a visual where Goku faces forward!! His eyes shine silver, and he wears a stern expression!!

History’s mightiest “Tournament of Power” is being held in Dragon Ball Super to decide the fate of all the universes. Starting in October, it at last reaches a turning point as Goku finally faces off with his strongest opponent, Jiren. From there on out it will truly be a continuous run from Goku and co.’s big battle to the climax. And to kick it off, Dragon Ball Super will be airing a “1-Hour Autumn Special” on October 8th. Unprecedented surprises are in store, so please look forward to it. Plus, with Dragon Ball Super powering up in this super-climax and One Piece heating up in celebration of its 20th anniversary, a collaboration between these two great Sunday anime is finally becoming a reality. It’s a dream visual symbolizing the two great anime, as if Goku and Luffy were on an adventure together!

In conjunction with this new preview video, the official Dragon Ball Super Twitter account is holding a contest where those who retweet their post with the specials’ collaboration image have a chance at winning a poster signed by Masako Nozawa (Son Goku, et al.) and Mayumi Tanaka (Luffy, Kuririn). Five winners will be selected, with a retweet deadline of 17 September 2017. 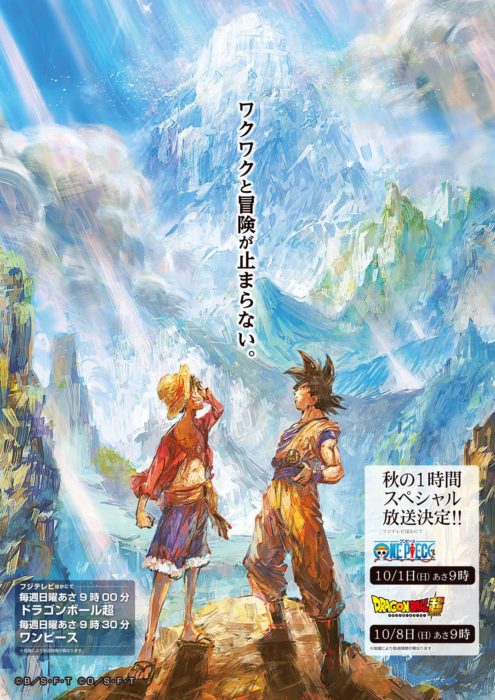