Dragon Ball XENOVERSE 2 originally launched last year on the PlayStation 4, Xbox One, and PC (via Steam). Bandai Namco brings the game to the Nintendo Switch this month, with its Japanese launch (07 September 2017) coming slightly ahead of its international launch later this month (22 September 2017).

Despite facing some initial physical copy supply constraints, the game pushed 24,045 copies in Japan during the reporting period of 04 September 2017 to 10 September 2017, coming in as the third-best-selling game of the week (behind Destiny 2 on the PlayStation 4 and Splatoon 2 also on the Nintendo Switch). 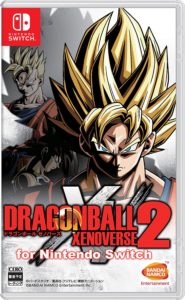 The game originally sold 66,035 copies on the PlayStation 4 back during its respective first week in November 2016.

The Switch version runs at a maximum of 900p in docked mode (720p in handheld mode), and supports the various Switch-specific methods of input and play with up to six-players in local play (using multiple Nintendo Switch consoles). Pre-order and first-run copies come packed with bonus material, including the story mode from the first Dragon Ball XENOVERSE video game.