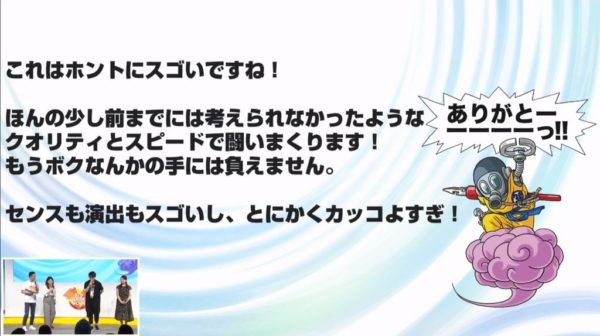 This is truly incredible!

You can fight your heart out with a quality and speed that was unthinkable even just a little while ago! It’s already too much for me to handle.

The style and direction are amazing too, and it all looks too cool!

Toriyama has provided comments on few video games throughout the years, perhaps most notably with Super Dragon Ball Z, another more traditional fighting game developed by Crafts & Meister for arcades in 2005 and then PlayStation 2 in 2006 whose visual style adhered more to the original manga.

The 3-on-3, “2.5D” fighting game is set for a February 2018 release worldwide and is under development by Arc System Works for the PlayStation 4, Xbox One, and PC (via Steam). The game is advertised as running at a 1080p resolution and 60fps frame rate, with higher resolutions available on the PlayStation 4 Pro and Xbox One X consoles. Currently-announced playable characters include Son Goku, Son Gohan, Vegeta, Freeza, Cell, Boo, Trunks, Piccolo, Kuririn, #16, #18 (with #17), Yamcha, and Tenshinhan (with Chiaotzu), as well as “Super Saiyan God Super Saiyan” (SSGSS, or “Super Saiyan Blue”) versions of Goku and Vegeta that can be accessed early via pre-orders. A closed beta was recently held on consoles — tune in to Episode #0427 of our podcast for some initial thoughts.