A new pre-order bundle for a “Dragon Ball FighterZ: Ultimate Edition” on Microsoft’s website details additional downloadable material coming to the game in the form of a “FighterZ Pass” with access to eight additional characters, an “Anime Music Pack”, and a “Commentator Voice Pack”, with a listed release date of 26 January 2018 for $109.99:

Schedule for the Early Access to the Open Beta will be provided at a later date.

DRAGON BALL FighterZ is born from what makes the DRAGON BALL series so loved and famous: endless spectacular fights with its all-powerful fighters.

High-end Anime Graphics
Using the power of the Unreal engine and the talented team at Arc System Works, DRAGON BALL FighterZ is a visual tour-de-force.

3vs3 Tag/Support
Build your dream team and sharpen your skills to master high-speed tag combinations.

UPDATE: Bandai Namco formally unveiled the “FighterZ Pass” for all editions of the game as an additional $34.99 purchase indeed slated to include eight additional (unannounced) characters. 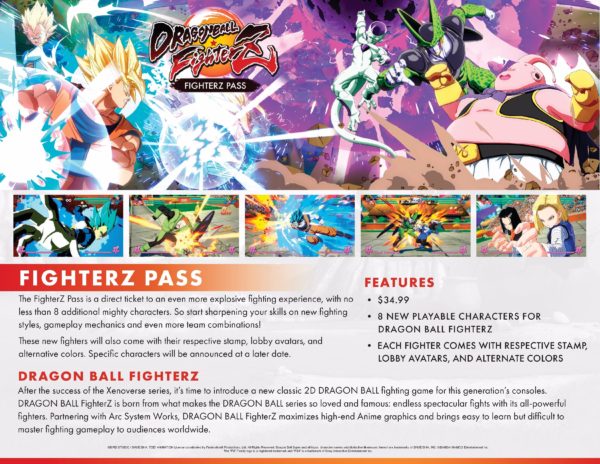 The 3-on-3, “2.5D” fighting game is set for an early 2018 release worldwide and is under development by Arc System Works for the PlayStation 4, Xbox One, and PC (via Steam). The game is advertised as running at a 1080p resolution and 60fps frame rate, with higher resolutions available on the PlayStation 4 Pro and Xbox One X consoles. Currently-announced playable characters include Son Goku, Son Gohan, Vegeta, Freeza, Cell, Boo, Trunks, Piccolo, Kuririn, #16, #18 (with #17), Yamcha, Tenshinhan (with Chiaotzu), Ginyu, and Nappa, as well as “Super Saiyan God Super Saiyan” (SSGSS, or “Super Saiyan Blue”) versions of Goku and Vegeta that can be accessed early via pre-orders. A closed beta was recently held on consoles — tune in to Episode #0427 of our podcast for some initial thoughts.