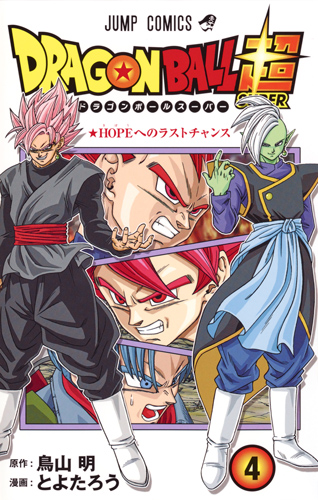 In his introduction to the volume (inside the print edition’s dust jacket), Toyotarō states:

Toriyama-sensei said that “Dragon Ball is a collection of weirdos, but through one thing or another, they end up looking like good guys.” Not “they are good guys”, but “they look like good guys”. So that’s how it is, I thought.

Per the norm (to offset the odd number of pages per chapter), Toyotarō has included fun drawings between chapters. In one drawing, Gowasu welcomes (the presumably not-yet-super-evil) Zamasu to study with him in the Kaiōshin realm. 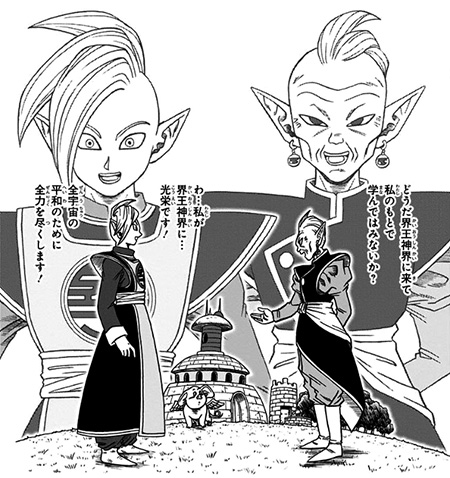 Chapter 23 has been expanded from 45 to 49 total pages with new panels and entire new pages showcasing Vegetto’s overpowering of Merged Zamasu. 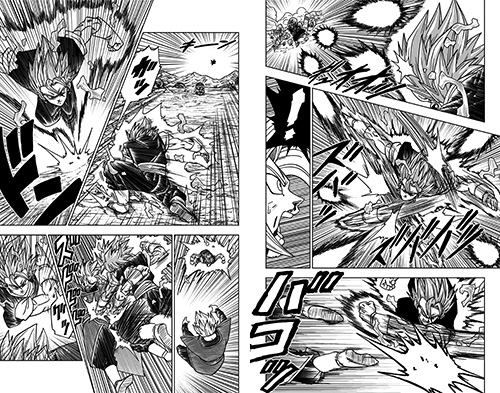 Whereas the third volume only included a brief series of illustrations and comments about the approval and revision process with original author Akira Toriyama, the fourth volume returns with a follow-up to the first volume’s “Tori-Toyo Talk”. In the new joint talk, Toriyama and Toyotaro “…discuss the secrets behind the birth of the ‘Future Trunks arc'”, touching on how to convey the psychological state of characters on the page, as well Toyotarō being asked to adopt some of the more “loose” aspects of Toriyama drawing and story-telling.

TORIYAMA: As far as his illustrations go, previously it always seemed as if he was chasing after my Dragon Ball. However, recently his own colors have started to emerge, and I think it’s made for a definite improvement!

TORIYAMA: Let’s see… if I have to say something else, then I guess it’s that you’re too careful! Particularly with battle scenes, it might actually be good to cut corners a bit.

TOYOTARŌ: Battle scenes are really difficult, and I’m always fretting over them…

TORIYAMA: I had trouble drawing fights, too. But sometimes drawing them with a rough touch can produce good results, oddly enough. That’s why it’s important to cut corners (laughs). That’ll be perfect!

TOYOTARŌ: I’ll keep that in mind!

The first two volumes included short bonus chapters that were originally printed in the 2015 and 2016 Jump Victory Carnival attendee books. Though this year’s event did in fact come with a third bonus chapter, it does not appear here in this fourth collected volume.

The volume ends with a two-page spread teasing the “Universe Survival arc” manga adaptation, as well as a new image of Goku (itself an homage to Akira Toriyama’s original illustration for the 1986 #25 issue of Weekly Shōnen Jump in Japan). 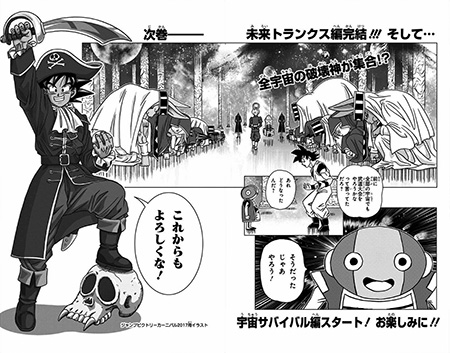 The fourth volume is available for purchase via CDJapan and Amazon Japan. Unlike prior volumes, a digital release was made available the same day as the print release.

The Dragon Ball Super “comicalization” began in June 2015 as a promotional tie-in for the television series. The manga runs monthly in Shueisha’s V-Jump magazine, with the series’ twenty-ninth chapter coming last month in the magazine’s December 2017 issue. Illustrated by “Toyotarō” (in all likelihood, a second pen-name used by Dragon Ball AF fan manga author and illustrator “Toyble”), the Dragon Ball Super manga covered the Battle of Gods re-telling, skipped the Resurrection ‘F’ re-telling, and “charged ahead” to the Champa arc to act as further promotion for the television series. Viz is currently releasing free digital chapters of the series, and began their own collected print edition this spring. The second collected volume is due out in English from Viz in December.

The Dragon Ball Super television series airs Sunday mornings at 9:00 a.m. on Fuji TV in Japan. The series now receives weekly simulcast streams on services such as Crunchyroll. FUNimation has also announced their American streaming and distribution license for the series, with the English dub beginning earlier this year on Cartoon Network, and the home video release kicking off this summer.