Shueisha’s recently launched “Dragon Ball Official Site” has announced the production of a new Dragon Ball theatrical film scheduled for a “super-wide” national release in Japan in December 2018. This movie will be the 20th produced for the franchise, with the first movie premiering over 30 years ago in December 1986. 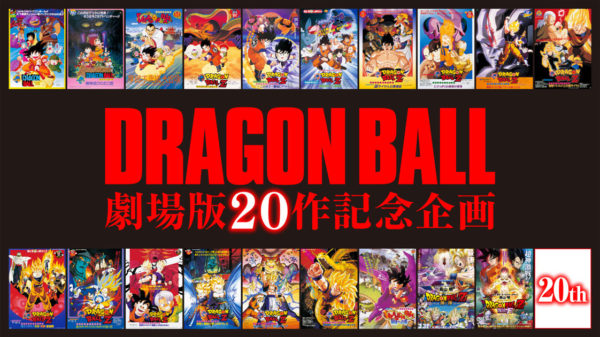 As with the 2015 movie Resurrection “F”, original author Akira Toriyama developed the movie’s story and concept, as well as writing the its script and providing character designs. While movies of the past have centered around specific enemies, this film’s theme will center around “the universe’s mightiest warrior race, the Saiyans”. It is undoubtedly very likely that much, if not all, of the new information provided by Akira Toriyama in his “Saiyan Special Q&A” in the January 2018 issue of Saikyō Jump was taken from the story development for this new movie. Read below for the full announcement:

An important announcement from the mountain stage on the first day of “Jump Festa 2018”!

The development of a new Dragon Ball movie, the momentous 20th film in the series.

The Dragon Ball movies began at the Toei Manga Festival in 1986.

They went on to produce numerous such beloved characters as “Coola”, “Broli”, “Bojack”, and “Janenba”.

After 2013 saw the premier of the first film in 17 years, Dragon Ball Z: Battle of Gods (net gross 2.99 billion yen), the Dragon Ball world expanded even further with 2015’s Dragon Ball Z: Resurrection “F” (net gross 3.74 billion yen), leading to the TV anime Dragon Ball Super currently airing. As befits the 20th entry in a movie series that has continued to pursue even stronger characters and even more entertaining stories, this film is being diligently produced with the goal of having the greatest scale and quality of the series to date!

As was the case with the last movie, original author Akira Toriyama-sensei is in charge of the original work, script, and character designs, raising expectations even higher.

It looks like he’s already done more image illustrations than for any movie before, so we can’t wait for the film’s debut in December 2018!

And the theme for this movie is “the strongest warrior race in the universe, the Saiyans!” From Battle of Gods onward, Goku and co. have achieved new evolutions such as Super Saiyan God and Super Saiyan Blue.

And so, it seems that this film depicts the “origin” of Goku and co.’s strength, the strength of the Saiyans, who remain the strongest warrior race in the universe even after all sorts of powerful warriors from throughout the universe have dauntlessly appeared.

Unlike the two most recent film announcements, which were announced in Shueisha’s Weekly Shōnen Jump and V-Jump magazines, the official announcement for the 2018 movie was made earlier in the day at “Jump Festa 2018” during a stage presentation. This is likely an attempt by Shueisha to control the announcement and avoid news breaking prematurely, as has happened in the past due to prevalent early online leaks of magazine issues. Also in contrast to previous movies, which have premiered in spring and summer months, the 2018 movie will premiere in December. It is likely no coincidence that the only other Dragon Ball movie to premiere in December was the very first.

Stay tuned for more updates as they become available!

UPDATE: Toei Animation’s official “Dragon Ball Super” website has been updated with the announcement, which includes a link to the movie’s official website.