The official Dragon Ball website’s seventh entry in “The Nearly Complete Works of Akira Toriyama” — an on-going series highlighting rare and important pieces of the author’s work over the years — is a two-page spread from the 1993 #12 issue of Weekly Shōnen Jump (which itself also featured chapter 411 of the Dragon Ball manga), released 18 February 1993. 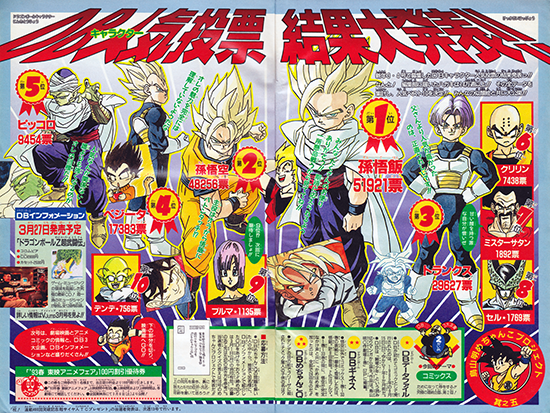 Most notable in this splash is a listing of results from a character popularity poll, with Akira Toriyama providing new color illustrations for the top five characters (all of which were later reprinted in Daizenshuu 1):

The splash’s left box mentions the forthcoming release of the Dragon Ball Z: Super Butōden soundtrack due out 27 March 1993. The bottom provides factoids about how long ago the first Dragon Ball manga volume was released, a mention of Toriyama’s one-shot Dragon Boy and its availability in the second short-works collection, and wraps up with a contest question asking the name of the Namekian killed by Freeza before Dende’s eyes (the answer being Cargo; this scene was adjusted in Dragon Ball Z episode 48 to have Dodoria be the one to carry out the deed). The far left includes a ¥100 discount coupon for the upcoming spring 1993 “Toei Anime Fair” (where the eighth Dragon Ball Z film was set to debut). 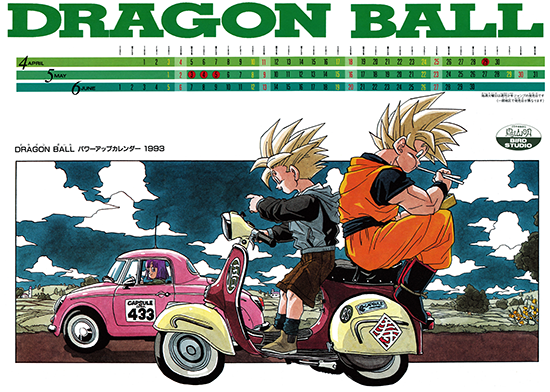 The backside of the calendar featured a special preview of the at-the-time upcoming spring 1993 “Toei Anime Fair”, which was being dubbed “Akira Toriyama: The World 2”, as it would be the second animation fair to feature an all-Toriyama movie line-up, with the first being the summer 1990 “Toei Anime Fair”. The two movies that premiered on 06 March 1993, as a part of the animation fair, included the aforementioned eighth Dragon Ball Z movie (the first to feature Broli) and the fifth movie of the Dr. Slump — Arale-chan series. A short blurb was also included promoting the second hour-long Dragon Ball Z TV special, which was set to premiere on 24 February 1993, less than a week following the release of this issue of Weekly Shōnen Jump.