FUNimation’s online shop reveals a 19 June 2018 release date for their fourth part of the Dragon Ball Super television series on DVD and Blu-ray. 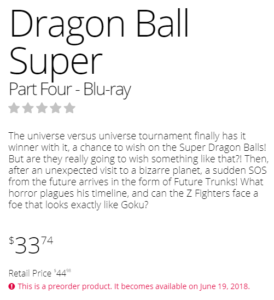 The universe versus universe tournament finally has it winner with it, a chance to wish on the Super Dragon Balls! But are they really going to wish something like that?! Then, after an unexpected visit to a bizarre planet, a sudden SOS from the future arrives in the form of Future Trunks! What horror plagues his timeline, and can the Z Fighters face a foe that looks exactly like Goku?

The bilingual (English/Japanese) two-disc set will span episodes 40 to 52 and is slated to contain 18 minutes of bonus material. The set will retail for $39.98 MSRP on DVD and $44.98 MSRP on Blu-ray.

The Dragon Ball Super television series airs Sunday mornings at 9:00 a.m. on Fuji TV in Japan. The series now receives weekly simulcast streams on services such as Crunchyroll. FUNimation maintains also announced their American streaming and distribution license for the series, with the English dub beginning earlier this year on Cartoon Network, and the home video release kicking off this summer.

Thanks to WTK for the heads-up.